Should Ravens fans get ‘opt out’ season ticket opportunity? 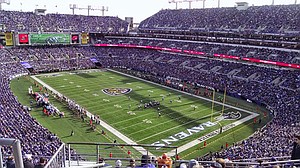 As the Covid-19 pandemic continues to evolve, the impact it will have on football is in question. Two preseason games have been canceled. The National Football League Player’s Association (NFLPA) voted to eliminate all four preseason games this season. The possibility of having a season without fans in the stands is becoming a likely option.

Currently, the Baltimore Ravens are not one of the teams to offer an “opt out” plan but that could change in the near future. Earlier this year, the Ravens pushed the final season ticket payments back from May 15 to June 15 to accommodate their fans.

“We’re constantly monitoring the serious impact this public health crisis is having on our fans and community,” Ravens senior vice president of ticket sales and operations Baker Koppelman stated to SI.com in March. “Priorities have shifted for many people, and rightfully so. We hope this adjustment offers some relief at a time when families and businesses are forced to deal with more pressing needs.”

The NFL has not developed a league-wide policy for fan attendance this season. Each team is being allowed to determine fan attendance at games as it pertains to the corona virus guidelines set by the state where the team plays their home games.

According to Maryland.gov, the state’s key COVID-19 health metrics continue to trend in a positive direction, with the statewide positivity rate dropping to a new low of 4.51 percent and total current hospitalizations falling to 403.

M&T Bank Stadium has provided a legitimate home field advantage for the Ravens over the last two regular seasons. The Ravens hold a combined 13-3 home record since 2018. But both seasons ended with a home loss in the postseason.

There will almost definitely be a limit on how many fans will be able to attend the games in the stadiums. The process to determine which fans will be allowed to attend games still has to be addressed. Hopefully, the decision will be made by the time the stadiums are reopened this month.

With training camp set to begin on July 28, 2020 for all teams, fan attendance won’t be an option for practices at the Under Armour Performance Center or any of the other NFL facilities. Attending games may not be an option either.