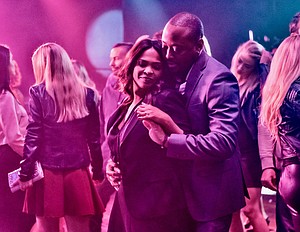 Dull suspense/thrillers are most often mired in formula. Example: Woman in distress. Man stalks her. Confrontations and narrow escapes. Big do-or-die finale. The Perfect Guy (Sanaa Lathan is hounded by Michael Ealy) stuck to those basics. Fatal Affair does too and adds nothing new to the mix.

Director/writer Peter Sullivan and co-writer Rasheeda Garner stay on the path most traveled. Even their setting seems generic and predictable: Coastal hideaway HGTV gray home with white shutters in the fictional California town of Ocean Crest. You’d almost expect to see the crew from House Hunters, Love It or List It or Property Brothers in the next frame introducing the couple to their new house.

Ellie (Nia Long), a corporate attorney, is going through a transition. She’s leaving her San Francisco firm and preparing to start her own practice. She’s just moved out of the city to a quieter small town and a plush beachside property. Her husband Marcus (Stephen Bishop, Moneyball) is an architect recovering from a physical injury. Their daughter Brittany (Aubrey Cleland) attends U.C. Berkeley and is home on occasion.

Shortly before her departure, Ellie’s company hires David (Omar Epps), a tech expert, to do some consulting and espionage work for a client. Cue the drum roll: Ellie and David have history. Their “friends in college” backstory includes him liking her and her shading him. One night when Ellie is expecting to meet her gal pal Courtney (Maya Stojan, TV’s Agents of S.H.I.E.L.D.) for drinks, she invites the ever-attentive David along. Courtney bows out, leaving David and Ellie to rehash the past and rekindle a flame. Flirtations turn into fondling. She cuts it off. He’s gotta have it.

Obsession. Overwrought passion. Fixation. Call it what you want, David’s drive to land a woman who disses him goes beyond the pale, deep into an uncontrollable mental illness. Making his manic state riveting would require forethought, development and innovation. All of that is lacking.

The antagonist certainly has a mean streak, but it is never diabolical. Frightful, never eerie. Pedestrian, never over-the-top. The protagonist is caught in a hard place. Scared of him but even more petrified of her husband finding out she was this-far from giving it up to another man. Sprinkles of violence, battery, abuse and terror ensue. Very little blood is spattered. Nothing graphic enough to make you avert your eyes. If abject fear — the whole point of a good thriller — never shows up on the screen, you won’t feel it at home either.

Visually, what’s on view is a step up from what was in the old days referred to as a “straight-to-video” title. In these days of streaming, these kinds of B-movies are now blending into higher and lower quality films that find more accessible homes on Netflix, Prime Video, Hulu, HBO Max… Places where mediocrity can have a long, on-demand shelf life among gems.

Matthew Janszen’s musical score, with its sinister violins, screeches at the right times, but that isn’t a compliment. Darcy C. Scanlin’s production design, Debra Echard’s set decoration and Alex Stamm’s art direction make all the homes, offices and bars look artificial. There is a tacky glossiness to Eitan Almagor’s cinematography that wipes away any realism. And Randy Carter’s editing, though swift at cutting the proceedings down to 89 minutes, neither helps nor hinders.

The script pulls on everyday vulnerabilities many long-standing couples face. Ellie confesses to David that her marriage has issues: “One day you wake up 20 years later and the person next to you is a complete stranger.” Fine. Then the plotline becomes far-fetched and never comes back to earth: As it becomes clearer that the tech wizard is willing to threaten her marriage and family, Ellie sets up a meeting with David in a restaurant. What really scared woman would invite her stalker to brunch? Sullivan and Garner needed to dig a lot deeper for the dialogue, characters’ backstories and motivations to turn this drivel into something remotely compelling. Something that would make Fatal Affair more fiendish and macabre like Fatal Attraction.

Paul Sullivan’s direction lacks style, which puts more pressure on the storyline and plot pieces to rouse anxiety and keep an audience’s attention. As the feeble thriller aspects mount, desperate phone calls are dialed, missed opportunities to escape grow and touches of gruesomeness add up to nothing. If you’re debating a trip to the fridge as the film progresses, don’t. Just get up and grab that beer, soda or pint of ice cream and be assured that you won’t miss one crucial plot detail that will stop you from figuring out how the film will end…

Fans of Nia Long will be happy to know that she still has her chops. She’s as beautiful as she was back in Boyz ‘N the Hood days. Older, more mature and as captivating. Omar Epps is a solid actor always capable of making you believe his character. Both seem far better than the material. The unlikely scene-stealer is Stephen Bishop. His career is not as storied as the two lead actors, which makes him a bit of a mystery. He turns the role of Marcus into the guy next door, a man who you think you know from somewhere, but you really don’t. Friendly, concerned and adapting as things spiral out of control, Bishop deserves a leading role in a film.

Fatal Affair never builds to the dramatic desperation its genre requires. Never becomes more than the sum of its parts. That’s a crime. More of a crime than any felony in the movie.