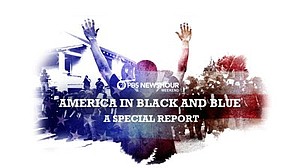 New York— America in Black and Blue 2020, a new PBS NewsHour Weekend special, offers context for and insight into the widespread protests currently engulfing the nation after the latest display of police brutality against Black citizens. Premiering tonight, Monday, June 15, 2020 at 9 p.m. on PBS (check local listings), pbs.org/newshour and the PBS Video app, America in Black and Blue 2020 reports from across the country to explore the struggle for racial justice, accountability, equity and police reform efforts.

“In 2016, we worked with PBS and our producing partners to create America in Black and Blue, a special report about the alarming number of Black lives ended by police officers. The deaths of George Floyd, Ahmaud Arbery, Breonna Taylor and countless others since then necessitate a new look at this continued crisis in America, rooted in our nation's founding," said Neal Shapiro, President and CEO of The WNET Group. "We hope the first-hand accounts, points of view and reporting in this new special serve as a vital reminder that the lives and rights of Black people cannot be ignored, and that we all play a part in bringing an end to injustice, racism, discrimination and violence."

A recent Amanpour and Company interview with lawyer and criminal justice reform activist Bryan Stevenson by contributor Walter Isaacson explores the reaction to Floyd's death compared to similar moments in the past. The special also includes an interview with Kevin Young, poet and Director of the Schomburg Center for Research in Black Culture, as well as an excerpt from the upcoming PBS Independent Lens documentary Women in Blue that features the work of an African American Minneapolis police sergeant.