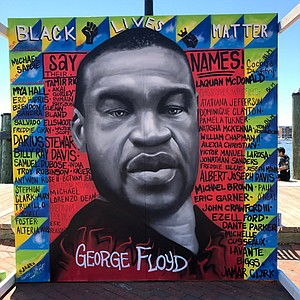 In hopes of dismantling racism for good, protests, walks, events and supportive displays by diverse races are popping up both locally and globally.Demonstrators from all walks of life have been filling public spaces in record numbers to speak up about police brutality; the need for reform; and the pursuit of acquiring justice for George Floyd and other victims who have died at the hands of the police.

June 7, 2020 marked one of those hope-filled days, despite the backdrop of social unrest. Hundreds of people attended a peaceful vigil at Susan Campbell Park, located in downtown Annapolis, to pay homage to George Floyd and others who have lost their lives to racism. Additionally, a mural entitled “Say Their Name” was painted live by local artists utilizing spray paint, permanent markers, and oil-based and acrylic paint to craft a facial representation of Floyd, along with names of other victims who tragically died in police custody.

Comacell Brown paint a mural of George Floyd and others who have lost their lives to police brutality. The mural is located in Susan Campbell Park in downtown Annapolis.

Ward—who specializes in photography and abstract art—also serves as the Youth Program Director for B.L.A.C.K. (Becoming Leaders Acquiring Critical Knowledge) Excel. The Annapolis native says the names painted on the mural were obtained from an online list of police brutality victims. More were added, while Ward listened to speakers at the event. A local shooting involving Cochise Daughtry in 1996 was among them.

“I didn’t think something like this had happened in Annapolis in recent times. For me it was more eye-opening, and it kind of gave me people to look up, really realizing it was a lot more than I thought it was,” Ward said. “As an artist, part of my message is always to let my voice be heard, whether I’m doing motivational speaking or art, because art is an expressive form of speaking itself. When you get to use different forms of protesting and things like that, again, the list was crucial to me because some people don’t know about those names. Some people may just come to see the painting, but they go there and see a name. Maybe just one name will catch their eye out of the rest of them, and you research that person’s story.”

Ward added that the whole list of individuals who lost their lives to police brutality could not fit on the mural, but each victim should still be cherished and honored. Ward and Brown agree. 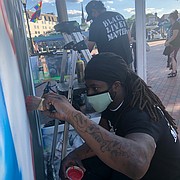 Jr, Deonte Ward, and Jeff Huntington paint a mural of George Floyd and others who have lost their lives to police brutality. The mural is located in Susan Campbell Park in downtown Annapolis.

Brown is the owner of Cell Spitfire Paintings and Designs, LLC. The full time, freelance artist who runs classes for children, paints murals and volunteers in the community. Brown has been a part of several marches and he says that recently, he has seen white people talking with their children as they walk by the George Floyd mural. He added that honest conversations with youth about history, as well as current events will help to ensure a brighter future for black people.

“It’s a big shift going on in the world,” Brown said. “I’ve already seen in the 24 hours that it’s (the mural) been up, it has already created great conversation.”

A former white classmate even reached out to tell Brown that he wants to know more about black culture, and that he now realizes that his life journey has not been as difficult. Brown’s friend is not the only one who is interested in delving into social issues many African-Americans face.

The day after the mural was constructed, Courtney Garton, an Annapolitan of 45 years, stood outdoors in Annapolis holding a neon sign, while trying to raise consciousness about changing police culture. African-American men drove by in their cars, while beeping their horns, to affirm agreement with the written poster message. On one side, the sign read “STOP KILLING BLACK PEOPLE!!” On the other, “CHANGE POLICE CULTURE” was inscribed in large letters. Garton says he wants conversations about reforming police departments to occur, as opposed to defunding them.

“I believe that systematic racism was created by white people, and I think that white people are [the] ones that need to change it,” Garton said. “I’m trying to get to a point where I really understand what it is like to be a black person in this country, and more and more, I’m understanding that the color of your skin is discriminated against in this country.”