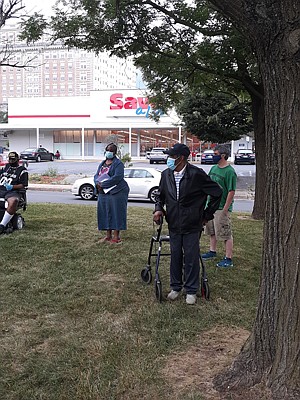 A passionate group of elderly individuals celebrated Juneteenth by outwardly expressing their solidarity with the Black Lives Matter movement in a silent protest just beyond the premises of the Linden Park senior living facility in Bolton Hill on June 19, 2020. 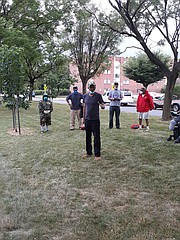 Dale McCullough, organizer of the silent demonstration, stands in the middle of the circle of protestors to give remarks

About 20 participants, most of whom were older than 70 and served in the military, assembled for the brief protest on the cloudy Friday afternoon.

Dale McCullough, the organizer of the silent protest, said he didn’t coordinate the event for publicity. Rather, he and some of the residents at Linden Park Apartments simply wanted to take a few minutes to show support for the Black Lives Matter demonstrations in light of the societal issues facing the nation over the last several weeks.

“We, the citizens of Bolton Hill, we sit around and we talk a lot about what could be and what would be, so we decided that we’d come out and show our solidarity to the Black Lives Matter (movement),” McCullough said, also conveying his disagreement with President Donald Trump’s threat to deploy military troops against protestors. “We did kneel for the brothers that have died behind police brutality. And not only brothers— black, brown and white too, who have died behind police brutality.” 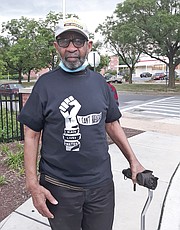 Ronald Curtis dons an "I Can't Breathe" Black Lives Matter t-shirt to show support for the demonstrations against police brutality and racial injustice.

“We want it to be known to the young folks we can’t march too much, we can’t lay in the street because we can’t get up,” McCullough said with a slight chuckle. “We just want to let people know that ‘we are with you.’ That’s it.”

After Preston finished the prayer, kneelers stood up and the protest was essentially over. McCullough thanked everyone who took the time to participate and show support as the demonstration concluded.

Benjamin Fulton, an 85-year-old Korean War veteran, was the oldest protester to participate. Drafted into the Korean War in 1958, he served in the Army for three years.

“I’m coming out today protesting what they’ve been doing to black people,” said Fulton as he explained his support for the BLM protests. “Nothing’s going to change with the policemen until (leaders) do something about it. Policemen don’t have the right to kill people just because they’re policemen.”

West Baltimore resident Ronald Curtis was invited to participate in the silent protest, and gladly made the trip across town to show solidarity. He said that what he’s seeing now is a reflection of the uprisings he witnessed as a youngster in the 1950s and 60s.

“The younger generation that’s coming up now, they’re actually tired. If Congress doesn’t hear their voices now, they never will,” said Curtis, another Vietnam War vet. “These kids are not being heard, and that’s what it’s all about right now.”

Juneteenth is a day that holds special significance particularly in the black community as a commemoration of the abolition of slavery in the U.S., and McCullough figured it was the perfect date to organize the silent protest.

“It’s a day that the last chains were supposedly taken off the slaves in Texas. They said 1865 but they really didn’t come off until 1867,” he said. “I thought it was very significant... It was a good day that just so happened to be in June, and June 19 was available so I think that was the perfect day to hold it.”

McCullough, a Navy veteran, served in the Vietnam War and retired as a 2nd Class Petty Officer. He said he feels the country is in an unpredictable state and hopes things improve soon.

“It’s disgusting right now because our parents and their parents were fighting for the same thing that these kids are marching for now,” McCullough opined. “It’s troubling because we don’t know where the nation is going. I’m not political, but we don’t have any leadership and aye we pray that it goes the right way.”