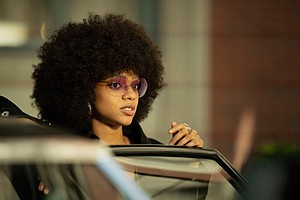 When you see the character Roxy Jones, played by Baltimore native Tiffany Boone, execute a couple of smooth roundhouse kicks in the new Jordan Peele produced Amazon series “Hunters,” you’ll most likely think of Pam Grier. Rather, you’ll think of one of the most iconic characters in American film that was played by Grier, “Foxy Brown.” That’s because Roxy kicks ass and takes names while rocking one of the best afros seen on screen since the Blaxploitation era. Boone informs us however, it’s other magical Black girls she looked to for inspiration for the role.

Boone laughs when asked about it. “You know, you put a Black girl in bell bottoms and a big afro and what are people gonna think, right?” She continues, “For me the inspiration for the role was more the women who were at the forefront of the Black Power movement in the 60s and the 70s like Elaine Brown, Assata Shakur, and Angela Davis.”

It becomes clearer why those choices make perfect sense for the role as the viewer gets deeper into the ten-episode series. Produced by Jordan Peele, and starring Jerrika Hinton (“Greys Anatomy”), as well as acting legends Al Pacino, Carol Kane, and Saul Rubinek, the disconcertingly timely series centers on an unlikely team of vigilantes whose mission is to eliminate a Nazi sleeper cell plotting to establish the fourth reich in nineteen seventies Stylistically and tonally, it is somewhat similar to Tarantino or Seth Rogen and Evan Goldberg’s Preacher.

Boone describes her character as being “The coolest girl in the room” She credits the costume and the perfect afro wig. “All of that kind of came like from the second I put on the wig. You can't help but feel like a badass chick. Those women were so effortlessly cool and so smart and naturally sexy.”

Knowing how often productions get Black women’s wigs wrong on screen, it’s a pleasant surprise how dynamite and outta sight Boone’s character’s afro is. Boone revealed that she was pretty proactive in making that happen. “I had a wig that was the same style as the one you see on the show and I auditioned with that wig. I automatically knew she had to have this hair and when I got the role, I said [to the stylists] ‘Okay, this is where you buy the wig.’”

Doing what she can to make sure she helps create a dignified work environment isn’t new to the thirty-two year old actress. Just prior to our phone interview, Boone issued a statement on social media to end speculation around her allegations of workplace sexual misconduct by her “The Chi” co-star Jason Mitchell, which led to her leaving the series. In part it stated, “Was I able to compromise my values, integrity, and happiness just to be employed?...The weight of what I was leaving behind felt like a ton but the weight of my responsibility to speak up was even heavier.”

During her phone interview with The Baltimore Times, Boone briefly discussed what she considers is the impact of the resurgent #metoo movement. “ It has empowered not only women but men as well. And not even just only in the entertainment industry, any industry to have the power to speak up when they've been in a bad work environment.”

Boone also expressed the opinion that she believes #metoo has spurred many employers to hold themselves more accountable. “It’s forced the industry to create an environment, rules, training, different things to make the industry better. It’s not just on the women to speak up, it’s on the whole industry to change the environment period.”

Boone, who’s also a graduate of Baltimore’s storied Baltimore School of The Arts, has been in great demand for a number of high profile projects lately including the upcoming “Little Fires Everywhere,” starring Kerry Washington and “The Midnight Sky” with George Clooney.


With so much filming, she doesn’t get a lot of time to visit her hometown, but when she does, she likes to stay close to home. “The last time I went home was last September for my grandmother’s 70th birthday. My mom and I threw her a birthday party. When I’m there I want to have my mom’s cooking, my grandmother’s cooking and see my nieces and nephews. I don't get to see my family much so when I get there it’s all about family.”