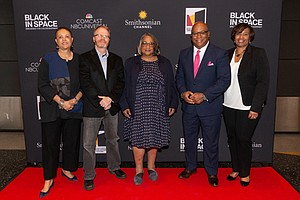 In recognition of Black History Month, the Reginald F. Lewis Museum partnered with Comcast and the Smithsonian Channel to air a special screening on February 19, 2020 that highlighted the accomplishments of the world’s first black astronauts.

“Black in Space: Breaking the Color Barrier,” a documentary presented by the Smithsonian Channel, chronicles some of America’s noteworthy experiences during the Civil Rights Movement in connection with the well-documented “Space Race” between the Soviet Union and the United States.

Concurrent with the Cold War rivalry between the U.S. and the Soviet Union, the documentary delves into the decades-long battle between the two superpowers for the first to bring diversity to outer space. The Black in Space screening shed light on the astronauts who were a part of that particular chapter of world history and the race to put the first black astronaut into orbit.

For the past five years, typically around February, the Reginald Lewis museum has used the partnership with the Smithsonian Channel to air films that deal with an aspect of Black History. This year’s screening, was unique in that black astronauts is a rare topic in public discourse, according to Jackie Copeland, the executive director of Reginald Lewis Museum.

“[The screening is] significant because no one thinks about African American astronauts, but we are a place that tells those stories,” Copeland said. “I’m very excited about it because, again, we’re a place where there’s knowledge and learning taking place, and we like to expose our visitors to the history of African Americans in all disciplines— and right now in space. Who would’ve thunk it, right?”

The courageous black men and women represented in the film like Robert Lawrence Jr.; Ronald McNair; Edward Dwight; and Guion Bluford; became astronauts at a time that many would consider risky, given the transformative era when the Space Race occurred. The film also studies the lasting legacy of the world’s first black astronauts— men who led the way for more diversity and inclusion in future NASA classes and space programs around the world.

“Black in Space” underlined some of NASA’s discriminatory practices against aspiring black astronauts while detailing how Russia exposed America’s glaring racism and hypocrisy by making history in sending the first person of African heritage to space: Arnaldo Tamayo Mendez, an Afro Cuban who flew in space on September 18, 1980.

Thus, the Soviet Union proved to the world that it was capable of changing the geo-political landscape of space by flying the world’s first black man.

But shortly thereafter, Bluford made history on August 30, 1983, becoming the first black American to travel in space. The Philadelphia native was a crewmember aboard the space shuttle Challenger, which took off from the Kennedy Space Center in Florida.

In addition, the screening had a segment that emphasized the racial tensions during the civil rights era and the subsequent protests and uprisings by black activists at the time. Civil rights figures such as Martin Luther King Jr., Ralph Abernathy and Gil Scott Heron expressed disdain with the idea of the U.S. government prioritized putting a man on the moon while many black citizens were being mistreated and were suffering from impoverished conditions.

Following the 51-minute film, there was a brief panel discussion. Moderator Vic Carter, a WJZ anchor; and panelists Cathleen Lewis, a curator from the National Air and Space Museum; and Smithsonian Channel executive producer Dan Wolf offered reflections before answering questions from the audience.“I’m not sure why I waited this long but I also know that there’s a lot of films [that] could potentially be made to help celebrate Black History Month, and this one came up,” Wolf said during the panel discussion. “This is really an amazing story and so I think it was not even much of a debate. It was like— ‘let’s do this film.’”

Lewis expounded on Dwight’s perseverance and experience along with some of the restrictions designed to make it hard for black people to navigate through NASA’s space program. “Why this is really important for us, is to be able to bring these great stories to diverse audiences, especially here at Reginald F. Lewis and our Baltimore community,” said Jessica Gappa, the director of community impact for Comcast - Beltway Region. “This is such an intriguing story for people to take pride in such talented astronauts and such talented scientists, to uncover this information.” “Black in Space: Breaking the Color Barrier,” premiered on February 24, 2020 on the Smithsonian Channel. Check your local listings for air dates and times in your area.