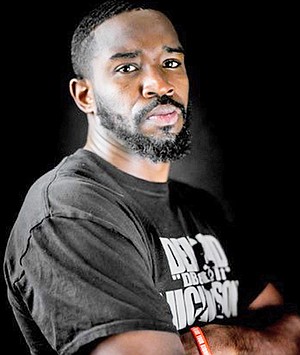 The National Kidney Foundation Serving Maryland and Delaware (NKFMDDE) announces that professional boxer, Demond “DBestAtIt” Nicholson will serve as a celebrity ambassador for the Foundation.

With a 22 win-3 loss-1 draw record, Nicholson is passionate about being a voice for those who are still fighting and for those who have lost their battle with kidney disease.

“At age 26, my life was altered due to kidney failure and I could have died. This undoubtedly proves that there is no age discretion when it applies to maintaining kidney health,” said Nicholson (Twitter: NicholsonNicholson, Instagram: Nicholson Nicholson, Facebook: Nicholson Dbestatit Nicholson Sr).

“I believe by sharing my story and partnering with the Kidney Foundation, I can raise awareness and stress the importance of maintaining kidney health,” he added. “Change and awareness is my purpose and it is my privilege to be an advocate for the National Kidney Foundation.”

On May 10, 2019, Nicholson weighed in for his fight on the Hurd/Williams boxing card on Showtime in Arlington Va. One hour later, he felt extremely ill, had problems breathing and could not walk. Nicholson was immediately picked up, carried down 10 flights of steps and rushed to Nova Hospital.

NKFMDDE’s signature fundraiser, Santé: A Taste of Baltimore will be held on Thursday, March 12, 2020 at the American Visionary Museum from 6 p.m. to 9 p.m. Demond Nicholson will appear as a celebrity judge and will pose for pictures/sign autographs for guests at the area’s premier food and beverage event.

Upon arriving, Nicholson was given a catheter while undergoing multiple tests. Doctors confirmed that his kidneys were shutting down and said that if he had gone to sleep that he would have died. Nicholson was put on dialysis immediately and spent several weeks in the hospital. While on outpatient dialysis for two months, his body went through several transitions. His normal weight was 180lbs but inflated to 230lbs. Doctors said that he may never fight again or if he did it would be over a year’s time.

Through prayer, strength and support Nicholson made his appearance back to the ring October 18, 2019. He fought 10 competitive rounds and won by decision. The Laurel resident has changed his eating habits and training regimen and has doctor’s appointments every three months to monitor his progress.

Nicholson trains out of Upton Boxing gym in Baltimore under the guidance of Coach Calvin Ford, Kenny Ellis and Russ Blakey. The Laurel High School graduate started boxing at 6 years old. After an amateur boxing record of 112-15, he was chosen to be an Olympic alternate.

In his first professional fight in 2013, he scored a TKO victory over Eli Smith, a three-fight veteran. In March 2017, Nicholson signed with one of the biggest promoters in boxing, Lou Dibella (Dibella Entertainment) and has been featured on ESPN, Showtime Boxing, CBS Sports and Fox Sports. On August 2018 Nicholson defeated Isaac Rodrigues and won the WBC United States Super Middle Title.

Nicholson will appear at NKFMDDE’s signature fundraiser Santé: A Taste of Baltimore as a celebrity judge and will pose for pictures/sign autographs for guests. Known as the area’s premier food and beverage event, Santé will take place on World Kidney Day, Thursday, March 12, 2020 from 6 p.m. to 9 p.m., at the American Visionary Art Museum in Downtown Baltimore.

“Fifteen percent of U.S. adults—37 million people—are estimated to have Chronic Kidney Disease. Most (nine in 10) adults with CKD do not know they have it,” said Pattie Dash, executive director of the National Kidney Foundation Serving Maryland and Delaware.

“It is wonderful that Demond Nicholson is putting a face to kidney failure and raising awareness that anyone at any age can be affected,” she added. “We are delighted he will be joining us for Santé, as well as our Greater Baltimore Kidney Walk in October 2020.”