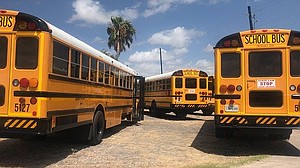 This material is a three-part series on Baltimore City Public Schools funding created under the Commission on Innovation and Excellence known as the Kirwan Commission.

The two other parts delve into the inclusiveness of the funding formula, and implementation considering BCPS race and social class in BCPS. Much of the information in Part 1 was garnered from the ACLU of Maryland. Although Kirwan funding is for all Maryland public schools, these articles concentrate on Baltimore City.

Much of the present-day concerns and potential solutions regarding the insufficient funding for Baltimore City Public Schools began with a simple phrase in the Maryland state constitution. It says in Article VIII, “The General Assembly...shall by law establish throughout the State a thorough and efficient System of Free Public Schools; and shall provide by taxation, or otherwise, for their maintenance.”

The year 1994 marked the date that the ACLU and others strengthened by parents’ and students’ winds for change filed a lawsuit in the Maryland State Circuit Court. The timeline below provides some highlights of its travel over the last 25 years.

The lawsuit brought by ACLU, NAACP Legal Defense and Education Fund and Baker Hostetler Bradford v. Maryland State Board of Education was brought on behalf of students and parents.

The plaintiffs said that BCPS students did not receive the “thorough and efficient” public school education. They claimed entitlement under Article VIII of the Maryland Constitution.

In 1996, the plaintiffs won. Bradford stated that students in Baltimore City did not receive the “thorough and efficient” public school education funding.

The ACLU Bradford lawsuit helped to generate the “Thornton” Commission and passage of the Bridge to Excellence in Education Act of 2002. The Act spurred increased funds for children from families with low income.” As a result, BCPS received $2 billion-plus.

Maryland ceased to account for inflation in 2008. According to the State, the U.S. and worldwide recession caused the stoppage. Since the recession in 2008, Maryland stopped adjusting the Thornton formula for inflation.

The stoppage leads to millions of dollars of lost funds for Baltimore City and like jurisdictions. Maryland school districts still await an updated funding formula from the “Kirwan Commission.”

The same year, the Maryland State Department of Legislative Services said the gap between what the State calculated (290 million in FY 2015) was inadequate. The $290 million in FY 2015 rendered fell short of the $358 million that BCPSS deserved. A total shortfall of $1.6 billion resulted in FY 0015. The gap remains. In 2016, Maryland Legislation created the Commission on Innovation and Excellence known as the Kirwan Commission. The Commission housed a 25-member body that Dr. William “Brit” Kirwan, presently chairs.That same year in 2016, independent consultants suggest increased funding. Maryland consultants for the State, Augenblick, Palaich, and Associates recommended that an added $2.9 billion still was needed for Maryland school districts to be adequately funded. It broke down to $1.9 billion from the State and $1 billion from local governments.

On March 7, 2019, concerned parents, the ACLU of Maryland and the NAACP Legal Defense and Educational Fund, Inc. went to court. Lawyers then filed a petition for increased relief in the Bradford vs. Maryland State Board of Education lawsuit.

The raised relief included what the plaintiff laid out to address the horrible physical conditions of school facilities that disrupt students’ ability to learn. Currently, the physical facilities and construction bills are separate from the Kirwan bill.

On November 21, 2019, the Kirwan Commission released its report to the Maryland General Assembly that became a bill. The Kirwan funding Commission report now is a bill in the House Appropriations Committee and the Ways and Means Committee. This body spent more than three years in its deliberations. It did not recommend any sources of funding. Instead, they left it to the General Assembly.

1994: Bradford v. the Maryland State Board of Education brought to Court.

1996: Court ruled in favor of plaintiffs.

2015: Shortfall and recommendations of additional funds.

2019: The plaintiffs filed in court for further relief under the Bradford case.

Commission releases its report to the legislators.

2020: Bills now in the General Assembly for hearings and debate.

Do you want to get involved in Baltimore students’ education? Contact the ACLU of Maryland, Baltimore Algebra Project, BluePrint for Maryland’s

of a Beautiful Struggle, Strong Schools Maryland, and the Maryland Education Coalition.

Former Coppin State University professor, Dr. Ken Morgan is a human rights activist. He can be reached at: btimes@btimes.com