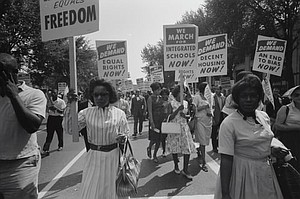 U.S. Senator Ben Cardin (D-Md.) issued the following statement to commemorate the 55th anniversary of the March 7, 1965 march from Selma to Montgomery, Alabama which culminated in the violent attacks against protesters known as “Bloody Sunday”.

“Fifty-five years ago, Bloody Sunday marked a turning point in the Civil Rights Movement. Hundreds of peaceful demonstrators marched from Selma to Montgomery, Alabama demanding full civil and voting rights for Black Americans only to be met with violence enacted by state law enforcement to silence their voices and the movement. Their heroism led to the historic passage of the Voting Rights Act that same year. Yet decades later, many brave individuals who marched that morning have also witnessed the erosion of its protections in 2013’s Shelby v. Holder decision.

“In order to fully honor their struggle, we must take up the fight to continue their work – in Congress and the voting booths – to end voter suppression against communities of color and fulfill the right to vote for all. The anniversary of Bloody Sunday calls upon us all to continue marching toward justice – as the protesters did that day. It calls upon us all to hold our nation accountable to the rights it guarantees to all.”

This weekend will mark the 55th anniversary of Bloody Sunday, one of the darkest moments in our democracy. On March 7, 1965, Alabama law enforcement officers brutally attacked hundreds of peaceful demonstrators marching from Selma to Montgomery to demand full civil rights for African Americans. These brave protesters put their safety and liberty on the line to build an America that lives up to its ideals of freedom, justice, and equality. It is thanks to their heroism – and the heroism of many civil rights activists before and since – that our country has made great strides towards those ideals.

However, in order to fully honor their struggle, we must also recognize that much of the hatred and discrimination which they fought to root out persists, though perhaps in less overt or easily recognized forms.

One of the strongest, most disheartening examples of this phenomenon is the ongoing assault on the right of minorities to vote. This is not ancient history. States all over the country continue to “modernize” strategies developed a century ago to suppress African American voting power. Some of these strategies are blatant and recognizable, like mass purges of voter rolls; the gerrymandering of districts with “surgical precision,” according to one court; and intimidation of voters of color. Some of the strategies are disguised behind excuses or fear tactics, like obstructive voter ID laws, felony disenfranchisement, and closures of polling sites in heavily minority-populated areas.

So long as we allow these sorts of practices to continue, we are denying American citizens the right to vote promised to them by our Constitution and we are undermining the integrity of our democracy. This is a problem on principle, of course – until we guarantee the right to vote regardless of race, we fall short of the unique promise and potential of the United States of America. But it is also a problem for broader practical reasons – when we exclude people from fully participating in our democracy, we prevent them from achieving the social, economic, and civic reforms they need to strengthen their communities.

So, what are we going to do about that? I know what I will do: I will fight for laws that will guarantee every American a voice in our democracy. That is why I have introduced bills like the Democracy Restoration Act (S.1068) to restore the federal right to vote to ex-offenders, and the Deceptive Practices and Voter Intimidation and Suppression Act (S.1834) to penalize the voter suppression efforts so frequently aimed at minority communities.

It is also why I am a fervent supporter of H.R.4, the Voting Rights Advancement Act. This bill, which was passed by the House of Representatives at the end of last year, would remedy the Supreme Court’s 2013 decision decimating Section 5 of the Voting Rights Act and thereby strengthen our ability to prevent discriminatory changes to state voting laws and procedures. I thank Senator Leahy for championing this bill and call on Leader McConnell and Chairman Graham to urgently bring H.R.4 for consideration in Committee and in the Senate.

Let’s honor all of those whose struggles for freedom and equality throughout our nation’s history have been met with violence and hatred. Let’s carry on their torch and help make their dreams a reality. Let’s fulfill the right to vote.