Ravens OL Marshall Yanda Is A Future Hall Of Famer 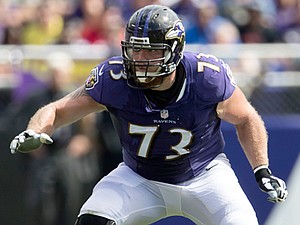 All good things come to an end. That's the likely thought process at the Baltimore Ravens facility when they learned of offensive guard Marshal Yanda'a retirement. After 13 years in the NFL, Yanda is moving on to the next phase of his life with his wife Sharon and their children Graham, Libby and Logan.

Only three guards in NFL history have been selected to eight or more Pro Bowls and won a Super Bowl. Yanda joins former Dallas Cowboys guard, Larry Allen and former Pittsburgh Steelers guard, Alan Faneca as the only players to achieve that feat. Allen is already in the Pro Football Hall of Fame. Faneca will likely make it in soon Yanda should eventually follow the others into Canton.

The 2007 third-round pick spent the duration of his career with the Ravens. Yanda was widely considered to be the best interior offensive lineman in the game. He was selected to six consecutive Pro Bowls from 2011 - 2016.

A broken ankle cost him the 2017 season, but he came back as strong as he was before the injury making it to Pro Bowls in 2018 and 2019. Yanda has always been known for his toughness and technical expertise as a lineman.

Yanda'a technically sound Hall of Fame level play allowed him to make an impact beyond the football field.

Being named an All-Fundamentals Team player meant Yanda received an equipment grant valued at $1,000 from USA Football. He was given the opportunity to donate to the youth organization or high school program of his choice. Yanda selected his alma mater Anamosa (Iowa) High School.

Hall of Fame left tackle Jonathan Ogden was a veteran when Yanda joined the team and liked him from the start.

"When he got out there, he had sound technique, and he also had this toughness about him. That, ‘I grew up on a farm, I bailed hay, and I’m just gonna out-tough you’ mentality,” Ogden told The Ringer in 2017.

Yanda'a position was not one that offered a lot of glory. It's a thankless job. However, there are few Ravens players who have been able to garner as much respect in the locker room as Yanda. In five years, he will be eligible to join Ray Lewis, Ogden and Ed Reed as Ravens teammates in the Hall of Fame.