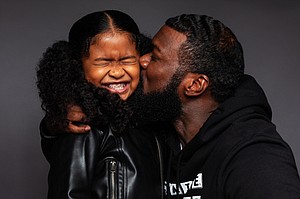 When you see the viral videos of Cornell “Chico” Conaway and his daughter Brooke Monroe Conaway, you can’t help but feel good inside. Their bond and love for each other is infectious.

You feel it when they sing old school Hip Hop and R&B songs together— with Brooke singing along with fierce emotion— and in all the hilarious moments they share online.

Conaway, a Baltimore native and owner of Gainz Sports Gear, says he has been filming his daughter since the day he and his wife brought her home from the hospital. Brooke loves being in front of the camera and it became their time to bond and have fun. He had no idea they would become Internet sensations and a positive daddy-daughter image for many.

“Black fathers get a bad rep for not being in their child’s life,” said Conaway, who loves that their videos are helping to change that narrative.

A few years ago, Cornell started sharing his love for old school music with his daughter and challenged her to learn the words to Run DMC’s ‘I’m Black and I’m Proud.” He was in awe when he saw that she had memorized the lyrics and performed it with passion.

Last year on Mother’s Day, Brooke and her Sidekick— the affectionate name for her dad on their YouTube channel— posted a video of them singing “I’m Every Woman.” Not only did it get the attention of Chaka Khan, but the Oprah Magazine, Jill Scott, Common and a host of other notable celebrities loved it and reposted it. This viral video led to her appearance on NBC’s ‘Little Big Shots,’ a show that features talented and extraordinary kids from around the world. Conaway says it was a rigorous process for her to get on the show. 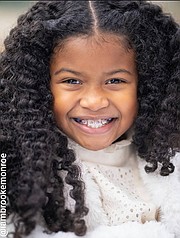 “So many kids go viral. Brooke had to do solo Skype sessions [with the producers] to see if she had the same personality on camera by herself,” Conaway said.

And, she did. She is a natural actress and performer but her parents are making sure she is learning her craft by having her take acting lessons via Skype with a star from ‘Scandal.’ The seven-year old, second grade honor roll student says her experience on ‘Little Big Shots’ was exciting.

“I got to make everybody happy. I got to be in front of a live audience so every body can know what I can do, and I got to talk to Melissa McCarthy and make friends from all around the world,” Brooke said.

These fun moments between the daddy-daughter duo have become the start of Brooke’s journey into professional acting, singing and performing.

Brooke and her father are signed with the Stewart Talent Agency. She is currently auditioning for television and movie roles, and we can’t wait to see what this star in the making does next.

Follow Brooke’s journey @iambrookemonroe and on the Conaway’s You Tube channel “Brooke and her Sidekick.”