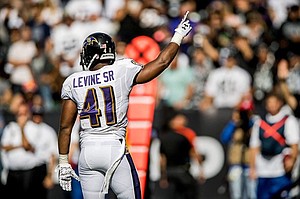 The Baltimore Ravens announced they have agreed to a one-year deal to bring back veteran defensive back Anthony Levine. This will be Levine's ninth season in the NFL and eighth season with the Ravens.

Levine's reputation as a grimy, 'do whatever it takes player' is the epitome of the Ravens culture. He is the underdog, an undrafted free agent out of Tennessee State who spent his first two seasons on the Green Bay Packers practice squad before joining the Ravens in 2012.

"I take pride in my hard work. I go out there and take coaching. I give them all that I have and they give me all that they have, so it works out," Levine said last March. "I've been a guy that's on the bubble my whole career. Every year I come in I have to make the team. I have to prove myself every year. You're never safe. Every year you have to come out and show you still got it."

The Ravens promoted Levine from their practice squad during his first season in Baltimore but he was placed on injured reserve after his first game. Levine recorded a tackle on special teams in his only 2012 appearance.

Special teams would be where he made his mark for the Ravens. He finished second on the team with 11 tackles in 2013. His excellence on special teams opened the door to playing time on defense. Levine also made three starts for Baltimore that season, playing both cornerback and safety.

Progressing from special teams to a more involved role is a path that Ravens head coach John Harbaugh also took. Harbaugh broke into the NFL as a special teams coach with the Philadelphia Eagles before adding defensive backs coach to his resume. Naturally, Levine is a player that Harbaugh pulls for.

"Levine is a great leader. Anthony Levine does a great job spearheading special teams. He's a big veteran there," Harbaugh said during the Ravens end of the season press conference.

Levine's contribution off the field is another area where he also epitomizes the Ravens' approach. The Ravens’ have long been a pillar in the Baltimore community. He has been a part of various community outreach programs ranging from providing coats for the homeless and team football camps for the youth. His foundation, 4EVERY1 Foundation has also worked to help Baltimore.

Bringing Levine back for another season was a good move for the Ravens. It was an effort to bring back a player that exemplifies the gritty spirit in Baltimore.