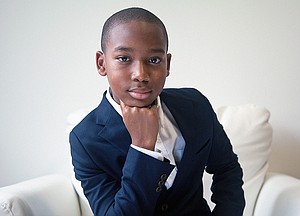 Christon Jones stands all of five-feet-tall and weighs about 100 pounds. At 13-years-old, he is already a talented football player; Amazon best-seller; certified Les Brown Speaker; a top Achievement Engineer; a Return on Investment Coach; and an accomplished investor and day trader.

The prodigy, whose nickname is "Truth," has already accomplished more in his young life than many seasoned Wall Street veterans.

"It all began a couple of years ago when I was eight years old. I wrote my first book about faith, family and football and how to overcome bullying," Christon said.

Published in 2016, "The Win Within," describes how Christon's world begins to change when his dream of playing football turned into a nightmare because of bullying. However, he explains that he is driven to win by his faith in God and the powerful bond he shares with his mother. He says he holds firmly to the belief that he is never alone, even in his darkest hour. He realizes that to win, he has to look within himself.

"Instead of thinking about the best way you can get revenge on someone, focus on becoming a successful person," Christon says, given advice that he posted on his website. "The best way to get your revenge is to help yourself. Not only are you helping yourself, you're also letting others know they can't hurt you. So remember to focus on becoming successful, and that's plenty." Perhaps among Christon’s many impressive talents is his Wall Street success. 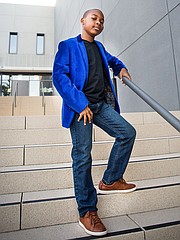 Christon, who has excelled on the gridiron, earning All-Star and MVP trophies, says he plans not only to play in the NFL when he is older, but later open a sports agency and management business to assist players with investments.

During the current novel coronavirus pandemic, Christon is on a mission to help 1,000 people become successful through his company, Return on Investment, LLC, where he primarily focuses on teaching the principles of trading while achieving upwards of a six-figure return.

Christon says he has counseled and coached many of his students, who range in age from 30 to 50 years old, into earning $15K or more a week by trading in the current market. He is determined to educate his students about the market and on proper investment strategies to survive during these troubling times.

During this downtime, I'm actually investing in the stock market and showing people how to day trade," he said, noting that "day trading is one of the most simple and efficient ways for somebody to make money from anywhere in the world.

Christon strongly advises investors not to get greedy. "Greed can cause you to lose a whole bunch of money," he said. “Investors must have patience, which is a skill because sometimes you've got to be able to wait instead of being scared and jumping out."

Finally, with the government sending $1,200 stimulus payments to many Americans, Christon says investing some of that cash might reap dividends.

"For people receiving a stimulus, investing depends on your current financials before getting the check," Christon said. "If you can afford to, take at least part of your check and put it into learning.

“There are ways to make money in the market, like basic stocks and cover calls, which are very conservative and almost a guaranteed way to make money regularly in market.

“There are swing trading and options as well. So, my biggest advice is that if you can afford to take money out of stimulus checks, invest it."

To learn more about Christon and his advice on day trading and the stock market, visit www.thetruthjones.com.