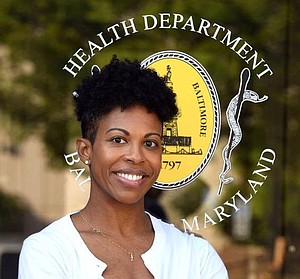 In the face of an ongoing public health crisis, and the subsequent concerns it has raised among various black communities, local leaders and health officials are actively addressing the disparities that adversely affect Baltimore City’s most vulnerable residents.

As of the evening of May 6, 2020, there are 2,752 confirmed coronavirus cases in Baltimore, and the 21215 zip code (Northwest Baltimore) leads the city with 457 positive cases. Given that 21215 is the most populous zip code in Baltimore, the visibly high number is somewhat expected.

Recent data and studies have shown that black Americans comprise the largest number of coronavirus cases in the state, highlighting deep-rooted racial inequalities regarding healthcare, access to vital resources and environmental injustice.

Along with Mayor Bernard Young and other city leaders, Dr. Letitia Dzirasa, commissioner of the Baltimore City Health Department (BCHD), has contributed largely in the fight against COVID-19 on a local scale.

“We have already seen nationally how it (the coronavirus) is disproportionately affecting African Americans, so we thought it was important to highlight what we know in terms of the disparities around COVID-19,” Dzirasa said, referencing the health department’s regularly updated dashboard.

According to the Baltimore City Health Department’s (BCHD) COVID-19 Dashboard statistics, 1,529 black residents have contracted the coronavirus as opposed to 260 White residents, 23 Asian residents, 516 ‘unknown’ and 260 ‘other.’ With black Baltimoreans tallying roughly 55.5 percent of coronavirus cases, and nearly 73 percent of deaths connected to the virus, leading health officials, political figures and community leaders have been faced with a unique set of challenges.

Dzirasa and her colleagues have also created a resource on BCHD’s website that lists testing capacity throughout the city, which is critically important for underserved communities.

“I think it’s important as we note the disparities among race - there are disparities among who has access to testing,” Dzirasa said. “I think as a city, we’re working to change that with the city-supported testing sites that we’ve established.”

Besides healthcare access inequalities, Dzirasa mentioned social determinants as an attributable factor to the disproportionate effect the coronavirus has had on predominantly black neighborhoods.

The social determinants of health, she said, speak to the conditions in which people grow, live, work and play. Correspondingly, these factors have a substantial effect on health outcomes. Because of residential segregation, black Americans tend to live in more densely populated areas, Dzirasa noted, which also plays a major role in the spread of the virus, among many other components.“COVID-19 just highlights what we already know about the disparities that exist for African Americans,” she said.

Likewise, Yolanda Jiggetts, the executive director of Park Heights Renaissance (PHR), has worked tirelessly with her staff to serve the needs of the community throughout this crisis.

PHR is a nonprofit specializing in housing services, providing educational needs and other related human services. Due to the pandemic, PHR has had to adjust its work model, but has managed to gather resources and support for its many clients.

“We’re constantly in conversations with the city. We have conversations with the health commissioner (Dzirasa) and her team to help us understand how we can be better advocates for putting out factual information around COVID-19,” Jiggetts said, also noting her team’s outreach efforts to local businesses. “At least three times a week, we coordinate with LifeBridge (Health) which is one of our anchor institutions… so of course we’re having these conversations on how best to address some of the safety needs in the community.”

PHR has partnered with other community-based organizations to express the need for personal protective gear, facemasks and food distribution and access, Jiggetts said.

Access to testing is a key priority for Dzirasa and the BCHD. As it currently stands there are three testing sites: in Pimlico, Druid Hill Park and Clifton Park. She and her colleagues are also brainstorming ways to implement mobile testing.

Additionally, Dzirasa and her team have rolled out messaging specifically targeted to the black community with guidance around social distancing and available resources.

“We actually have paper flyers that we work with volunteers and with our staff to distribute,” Dzirasa said. “Additionally, we’ve hosted focus groups to try and understand, ‘OK, how do we target our message toward the African Americans?’ At one point we were concerned the message wasn’t getting to young people, so adjusting our messaging as we see fit so that it really reaches who we’re trying to reach.”

Dzirasa has been on panels, radio interviews, webinars and attended an NAACP town hall forum to decisively address the Black community.

“I do think there’s value in having a health commissioner that’s African American. I think being much more relatable and saying ‘I recognize what some of these challenges are, but we are hoping we can help you overcome them together.’”

“We appreciate the partnership and what they bring to the table,” added Dzirasa, “and look forward to growing and expanding the work that we’re already doing.”