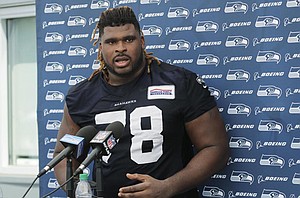 The Baltimore Ravens finished last season with an NFL-best 206-yard rushing average per game. The trio of Mark Ingram, Lamar Jackson, and Gus Edwards did most of the running but the offensive line led by guard Marshal Yanda was an equally important part.

Yanda retired after the season, leaving a void at right guard. Veteran offensive lineman DJ Fluker was realeaed by the Seattle Seahawks soon after the draft. He made it no secret that he wanted to become a member of the Baltimore Ravens.

"The Ravens were like, 'Hey if they're going to let you go we'll pick you up.' It was perfect timing," Fluker told Ben Baller on the Behind the Baller podcast.

Soon afterward, his desire came to fruition. The Ravens officially announced that Fluker was signed to a one-year contract on Monday, May 11, 2020.

At 6-foot-5, 342 pounds, Fluker is known as a bulldozing lineman perfect for a power scheme like the Ravens utilize. The player to team match is obvious.

It goes beyond scheme. Fluker was a standout at Alabama where he was a teammate of Ravens running back Mark Ingram in 2009 and 2010. Ingram was selected by the New Orleans Saints with the 28th pick in the 2011 NFL Draft.

"Ingram was one of the guys that would talk trash to you. He knew he was the man when he stepped into the backfield. His dad played in the NFL, so he had it embedded in him that he was destined to be great. I knew he was going to the league because of his mentality and how he worked," Fluker told Baller.

As a freshman, he was a candidate to replace current Ravens offensive lineman Andre Smith who was the No. 6 overall pick by the Cincinnati Bengals in the 2009 NFL Draft. Two years later, Fluker was selected by the San Diego Chargers with the 11th pick in 2013.

The Chargers originally slotted Fluker to play right tackle where he started all 16 games as a rookie and was named to the All-Rookie team. He moved to right guard in 2015.

The Chargers released Fluker in 2017. Four days later he signed a one-year $3 million deal with the New York Giants. Fluker started six games at right guard before a toe injury in Week 11 caused him to be placed on injured reserve.

Fluker moved on to the Seahawks the following season where he started nine games at right guard. He signed a two-year, $9 million extension with Seattle in 2019 but was released one year into the deal despite starting 14 games. One of his starts was in a 30-16 loss to the Ravens.

Now Fluker is reunited with Ingram in Ravens offensive coordinator Greg Roman's scheme. Fluker is one of six Ravens who played at Alabama.