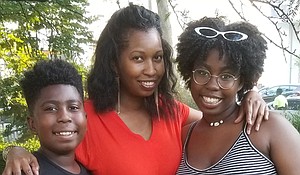 While the novel coronavirus pandemic has been a nightmare for just about everyone, it hasn't yet spoiled the summer dreams of Morgan State University alum, Ayesha Gallion. "I don't know if or when New Jersey, Philadelphia and New York museums will be open anytime soon," said Ayesha Gallion, who works as a senior communications editor for a firm in New Jersey. "I have always taken my children to experience culture— picking fruit on farms, exhibits, performances.

"It's all virtual now, thus my strong desire to take a drive to Maine. But who knows— a lot of other people may have the same idea."

A divorced mom, Gallion's struggle coping is real not just for her, but for her 16-year-old daughter Imaara who is going into her senior year of high school; and her 11-year-old son, Adam, who will enter middle school in September.

"My son had a camping trip as part of his send-off with the school— a tradition where we live," Gallion said. "Of course, this was canceled, and to go along with that, my daughter really went through a difficult time of missing her friends."

To help compensate for the letdown, Gallion says she allows her daughter to phone and Facetime a lot later than usual. She sometimes takes both her children's grocery shopping, but following the state's best practices; she usually shops alone.

"I take them so that they can see what the shelves looked like when the pandemic really hit hard— so empty," Gallion said. "They are now seeing toilet paper return to the shelves, slowly by surely."

At Morgan State, Gallion says she found an alumni page that reminds her of a playground. "We share photos and even our comments on the [Instagram] "Verzuz" battles."

However, as the situation continues, Gallion says she sees the need to take a break from social media and focus on her physical well being which, like millions of others, was interrupted because of quarantine.

"For a while, our circadian rhythms were really wacky. To a degree, it has not normalized," Gallion said. "I do try to get to bed whenever I can at a decent hour. I've also ordered several great books to keep my mind stimulated like Toni Morrison's 'Source of Self Regard,' and NAACP-award nominated book of my fellow Morgan State friend, Dr. Damaris Hill's, 'A Bound Woman Is a Dangerous Thing.'"

Gallion has even started writing letters and sending them via the postal service, a practice that mostly disappeared since the advent of email and social media. She also hosts a podcast about communication, which she records from home.

Gallion says her children are coming through the pandemic healthy, but it hasn't been easy.

"At first I was very strict with my daughter about the amount of time she was spending on the phone in group chats. It would be 1:30 a.m., and she would have 'virtual school' in the morning. I would give her a lecture about being more responsible," Gallion said. "After a while, I did ease up and allow some flexibility as long as she was getting her work done. My son refuses to let me try cutting his hair. His fade is now some kind of beautiful black cloud just growing out of this purple baseball cap that he wears all the time now— even inside.

"I let the kids relax when they need to. But they do have chores. I find that we are still trying to catch up with housework. This is my daughter's last summer to just really be a kid – next summer, and she will have graduated from high school.

"I am trying to figure out how to make this summer special. I was thinking of maybe taking her and her brother to hike Mt. Katahdin in Maine. We would drive."