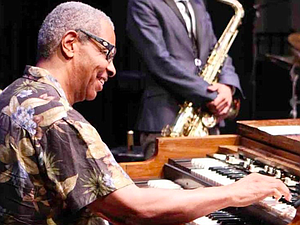 Hello everyone, hoping you and everyone in your family are well and safe. This COVID-19 is no joke. Please wear your mask when you leave your home and in some cases such as gong to the supermarket and casino, wear gloves, too. I truly miss seeing you at the live shows, concerts, clubs and the entertainment festivals, but hopefully this too shall pass. It is better to be not seen for a little while than to never be seen again alive. This week, I have a positive column for you. I am not talking about funerals or sick and shut-ins.

This week, I want to tell you about a long-time good friend of mine who is a very gifted and talented young man. I am talking about Baltimore native Charles Covington, Jr. who is self-taught and is a treasure trove of jazz lore who appears on over seventy-five albums. As a junior high student, he was expelled from school when he was caught in the band room picking out chords on the piano. After hearing Errol Garner and Ahmad Jamal, Covington was “hooked” on jazz. When he heard Ray Charles, he decided he had to imitate that sound. As his exposure to jazz grew, he became determined to find his own way.

Covington could hear a tune and duplicate it. Gifted with perfect pitch, by his own admission, he became a jazz “fanatic.” After serving time in the army, Covington returned to Baltimore determined to learn music and play jazz. He enrolled at the Peabody Conservatory of Music, taking the only class offered in jazz. He took his instruction at his teacher’s home, because people of color were not welcomed at Peabody at that time. Covington taught himself piano and organ at the Hammond Music School in Baltimore, spending 50 cents an hour to learn in their practice rooms.

As Covington’s fame grew, he studied Fats Waller, Ray Charles, Wild Bill Davis, and Jimmy Smith. He perfected his use of the sustain pedal on the B-3 organ. Later Covington became an open act at the Royal Theater in Baltimore. Later Covington took up chess, in an effort to make ends meet when playing music was slow. He’d haunt the chess clubs in New York where he hustled chess. And became one of the top ten Black chess players in America. He still enjoys “Life Master” status granted by the United States Chess Federation. He came home after three years performing on the road. His renown and expertise as a jazz pianist and organist garnered the attention of the Peabody Conservatory of Music which then hired him to teach jazz piano. His tenure there lasted twenty years. He also added to his resume a twelve-year stint as a professor of piano at Howard University.

Charles Covington, pianist, organist, chess master, mathematician, magician, gentleman and genius will be performing on live stream on Sunday, November 8 at 2 p.m. at An Die Musik Live. For more information, call 410-385- 2638 or go to: www.instantseats.com. Enjoy!!

Something else to lift up your spirit. How about some down home good gospel singing live? That’s right. Lonnie Parker, gospel promoter, producer and program organizer is celebrating his anniversary with a Pre-Thanksgiving Day Celebration on Sunday, November 15, 2020. Showtime is 3 p.m. at the Israel Baptist Church, 1200 N. Washington Street in Baltimore. The headliner is Harvey Watkins, Jr. and the Canton Spirituals, also on the program are Darrell McFadden & the Disciples; Kenny Davis & the Melodyaires; Eric Waddell & the Abundant Life Singers; and Stroman 3rd Generation Gospel Singers. The MC’s are Rev. Lee Michaels, Radio Personality for Heaven 600 and Minister Robert Wilson. I believe there will be some shouting going on. I sure hope they shout the COVID-19 away!

UNTIL THE NEXT TIME, I’M MUSICALLY YOURS!

Kenny Davis & the Melodyaires will be in concert at the Israel Baptist Church Pre-Thanksgiving Day Concert.