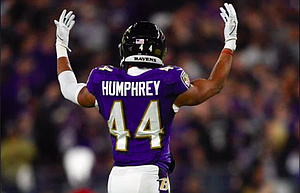 Until recently, the Baltimore Ravens were able to mostly steer clear of problems related to Covid-19 on their team. The NFL created a separate reserve list (Covid-19 reserve) for players that have either tested positive or come in close contact with someone else that had COVID-19.

Once a player is placed on the COVID- 19 reserve list, they have to quarantine for five days then submit a series of negative tests before re-gaining access to team facilities.

One player tested positive before training camp. Defensive tackle Brandon Williams was placed on the Covid-19 reserve list in October. Williams came in close contact with someone who had COVID- 19 causing him to be placed on the list according to ESPN. The report said Williams did not test positive but had to be isolated for five days after the initial exposure to COVID-19.

The Ravens placed star cornerback Marlon Humphrey on the COVID-19 reserve list on Monday, November 2. He took to social media to break the news that he received a positive test.

“I got the Rona. Hopefully I’ll be back healthy soon,” Humphrey said in his social media post. The Ravens released a statement regarding Humphrey’s positive test. “We were informed early this morning that a Ravens player has tested positive for COVID-19. He immediately began to self-quarantine, and our organization is now in the NFL’s intensive protocol. In coordination with the league, we have started the process of contact tracing and are following the guidelines of intensive protocol.

The health and safety of our players, staff and community continue to be our highest priority. We will continue to work closely with the NFL and our team doctors and will follow their guidance.

Humphrey played in Sunday’s game against the Pittsburgh Steelers before receiving news of his positive on Monday. Anyone COVID-19 carrier can be contagious for up to 72 hours before it shows in positive test results.

Humphrey was listed as having missed practice on Wednesday before facing Pittsburgh due to an illness. The illness was not said to be related to COVID-19.

“I don’t know if he was feeling ill or what he was feeling, but I know he tested [negative] completely through. So, we followed all the protocols, like I said, to a ‘T’ with that. He had a negative test every day [last week], so that’s why he practiced,” Ravens coach John Harbaugh said.

The Ravens initiated contact tracing to Humphrey immediately. Any player that was said to have been in close contact with Humphrey is subjected to five days of multiple tests.

The Ravens met virtually throughout the week and held practice with players wearing masks due to intensified protocols after a player tests positive.

Baltimore will face the Indianapolis Colts on Sunday, November 8, 2020 in a clash of AFC postseason hopefuls. They’ll be short a few players because of Covid-19 but the Ravens are up for the challenge.

“Straight-forward, let’s go. We’re excited to play the Colts this week,” Harbaugh said on Monday. “It’s always a tough place to play there. They’re very good at home, always, and they have a very good team. So, it’s a big challenge for us, but we’re a good team, and we’re looking forward to it.”