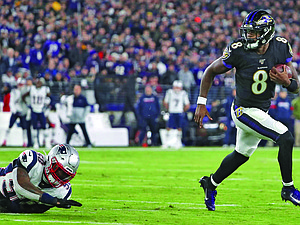 The Baltimore Ravens sit at 6-2 after a flipping the script in the second half of last Sunday’s game to beat the Indianapolis Colts 24-10.

At the midway point, the Ravens have the same record they posted last season on their way to a franchise best 14-2 finish.

“You take every game and every season as you find it,” Ravens head coach John Harbaugh said on Monday. “We’re just trying to figure out how we can improve and just be the best team we can be next Sunday night— that’s really what we have to focus on.”

Baltimore turned their attention to the New England Patriots this week. “We have to go there and play a Sunday night game. That’s a huge challenge. We’ve been there many times before, and we know what that’s about, so our focus will really quickly go to that next game,” Harbaugh explained.

Although the Patriots aren’t in their division, New England is a fierce rival. The two teams have met each other 14 times including four postseason games. The Ravens have won four games and the Patriots won 10 games.

Gillette Stadium hasn’t been the most pleasant place for the Ravens in the past. Under Harbaugh, Baltimore has only won two out of seven games on the road against New England. This week, the Ravens enter the game as the favorites, but they’re facing a New England team that is different from past versions.

Tom Brady is no longer the quarterback since he took his talent south to the Tampa Bay Buccaneers. Bill Belichick remains the head coach but now he has Cam Newton as the quarterback.

New England has struggled this season due to injuries, players opting out due to Covid-19 among other things. Belichick made an interesting comment when asked about the team’s struggles earlier this season.

“We sold out and won three Super Bowls, played in a fourth, and played in an AFC Championship Game,” Belichick said after the Patriots fell to 2- 5. “This year, we have less to work with. It’s not an excuse. It’s just the facts.” New England finds itself somewhere they aren’t used to being— near the bottom of the AFC East division standings. This Patriots team is still capable of giving the Ravens problems and won’t go down without a fight. They showed some life on Monday Night Football against the lowly New York Jets in their second half comeback.

This game will be Lamar Jackson’s second time facing the Patriots. The Ravens quarterback helped Baltimore upset the undefeated Patriots last season with a 37-20 win. Jackson racked up 224 total yards and three touchdowns (one passing, two rushing). He was 17-for-23 for 163 passing yards and a touchdown along with six rushes for 61 yards and two touchdowns.

New England will be desperate to win this game so they can stay alive in their division led by the 7-2 Buffalo Bills. Beating the Patriots won’t be a walk in the park on Sunday night.

The Ravens will likely be without defensive tackle Calais Campbell who has a strained calf. However, their secondary will be bolstered by Marlon Humphrey’s return from the reserve/Covid-19 list. A win over the Patriots will allow Baltimore to keep within striking distance of their archrival, the Pittsburgh Steelers who sit on top of the AFC North division.