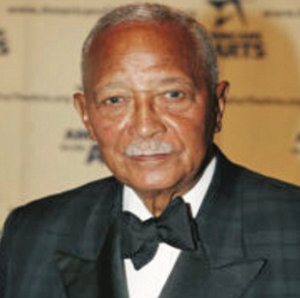 David N. Dinkins, who became New York City’s first Black mayor died on Monday night (Nov. 23, 2020) at his home on the Upper East Side of Manhattan. He was 93. He was the first and, to date, only African American to hold that office.

His death was confirmed by Mayor Bill de Blasio. It came less than two months after Mr. Dinkins’s wife, Joyce passed on.

Before entering politics, Dinkins was among the more than 20,000 Montford Point Marines (trained 1942– 1949; Dinkins’ service was 1945–1946). He is a recipient of The Congressional Gold Medal for his service as a Montford Point Marine in the United States Marine Corps, during World War II.

Dinkins began his political career by serving in the New York State Assembly in 1966, eventually advancing to Manhattan borough president before becoming mayor. He was president of the New York City Board of Elections, and served as City Clerk for 10 years before his elections as President of the Borough of Manhattan in 1985 and 106th Mayor of the City of New York in 1989.

On Jan. 1, 1990, Dinkins was sworn in before a jubilant crowd of 12,000 in City Hall Park. “I stand before you today as the elected leader of the greatest city of a great nation, to which my ancestors were brought, chained and whipped in the hold of a slave ship,” he said. “We have not finished the journey toward liberty and justice, but surely we have come a long way.”

Mr. Dinkins was the city’s most liberal mayor since John V. Lindsay in the 1960s and early ’70s. He desired to build housing, improve health care, and respond to the concerns of women, the aged and minorities, people with disabilities, gay men and lesbians.

As Mayor, Dinkins was responsible for the establishment of numerous widely heralded cultural staples such as Fashion Week, Restaurant Week, and Broadway on Broadway.

His administration initiated the revitalization of Times Square and secured an unprecedented deal to keep the U.S. Open Tennis Championships in New York for the next 99 years. This arrangement generates more annual financial benefits to the city than the Yankees, Mets, Knicks, and Rangers combined.

Mayor Dinkins also instituted “Safe Streets, Safe City: Cops and Kids,” a comprehensive criminal justice plan that expanded opportunities for the children of New York and continued to reduce crime in the years that followed his term.

He became a quiet elder statesman in later years, teaching at Columbia University. Mayor David N. Dinkins joined Columbia University’s School of International and Public Affairs (SIPA) as a Professor in the Practice of Public Policy in 1994. He serves on SIPA’s Advisory Board, and has hosted the annual David N. Dinkins Leadership & Public Policy Forum for over two decades.

The inaugural David N. Dinkins Professorship Chair in the Practice of Urban & Public Affairs at SIPA, Michael A Nutter, 98th Mayor of Philadelphia was selected in 2015. 2015 also welcomed the opening of the David N. Dinkins Archives and Oral History Project at the Columbia University Libraries.

In 2013, Dinkins published his memoir A Mayor’s Life: Governing New York’s Gorgeous Mosaic, chronicling his career as a devoted public servant and New Yorker in love with his city.

In the book, he acknowledged missteps during his term, including a failure to contain race riots in Crown Heights in 1991, for which he largely blamed his police commissioner, and his refusal to break a prolonged Black boycott of a Korean-owned grocery store in Brooklyn in 1990. But he attributed the narrowness of his victory in the 1989 mayoral election, and his defeat four years later, to the fact that he was Black, not to missteps.

This former mayor has received numerous awards and accolades throughout his long career. Among them, and most notably, the renaming of the David N. Dinkins Municipal Building on October 15, 2015.

In July of 2017, Dinkins celebrated his 90th birthday and stepped down from teaching his popular course at SIPA the following year.

He continued to play an active role at Columbia University and served a variety of civic and charitable organizations and Boards that assist young people including the Association to Benefit Children; Children’s Health Fund; Coalition for the Homeless; Jazz Foundation of America; The Nelson Mandela Children’s Fund; and Posse Foundation to name a few.

David N Dinkins is a member of the Council on Foreign Relations and the National Advisory Board of the International African American Museum; serves on the steering committee of the Association for a Better New York and the Advisory Council of New York Urban League.

He is a founding member of the Black & Puerto Rican Legislative Caucus of New York State and The One Hundred Black Men; a former vice president of the United States Conference of Mayors; Member-at- Large of the Black Leadership Forum; chairman emeritus of the National Black Leadership Commission on AIDS; Honorary Life Trustee of the Community Service Society of New York; Honorary Trustee of the Friends of Harlem Hospital; and Lifetime Member of the NAACP.

When Dinkins became mayor of New York City, Joyce retired from her position at the State Department of Taxation and Finance. She died on October 11, 2020, at the age of 89.