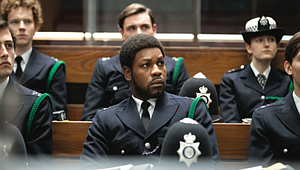 Mixed-race British academic, author, and documentarian David Olusoga wrote in “Black and British: A Forgotten History,“ “Almost every black or mixed- race person of my generation has a story of racial violence to tell... They are raw, visceral, highly personal and rarely shared beyond family circles.”

“12 Years A Slave” director Steve McQueen though, is changing that with “Small Axe,” a five episode anthology set in an intricately wrought seventies and eighties era England, premiering November 20, 2020 on Amazon Prime Video.

Centering Black British characters, Small Axe unravels the ways that racism in Britain mimics racism in America, and undoubtedly elsewhere in the Black diaspora. The Baltimore Times was afforded the first three episodes for preview.

Music is perhaps the most easily portable cultural manifestation, transported as memory across oceans. McQueen keys into this, making music the common thread of the various stories, using it to sharpen sketches of British West Indian culture. For the characters, it provides the comfort of familiarity, a means of smoothing the rough edges of daily struggles, and provides the war chants for their ubiquitous battles against enforcers of white supremacy. Ripped straight from the annals of history (as most of the stories seem to be), the subject of the first episode is the so-called “Mangrove Nine” court case, which came just two years after the infamous Chicago Eight case in the US. Both involve Black Panthers members and activist allies.

Violence broke out, resulting in the arrests of what became known as the Mangrove Nine, including The Mangrove owner Frank Chrichlow (Shaun Parkes), research scientist and Panther Party leader Altheia Jones-LeCointe (Letitia Wright), Panther Party member Darcus Howe (Malachi Kirby), and others under charges of inciting riot. The slow burn of events leading to the case, and riveting courtroom denouement, are dramatized. Though the acting is at times overwrought, what is plainly communicated is the Black community’s sense of frustration and damaged pride.

In the seventies, Jamaicans in British neighborhoods like Notting Hill were transforming the way people partied there, at the same time that Jamaican born DJ Kool Herc (Clive Campbell) brought the Jamaican brand of DJ’ing to a community center in the South Bronx, birthing what we now come to know as hip hop. “Lovers Rock,” the title of the second episode, references the genre of reggae that flourished in Britain at that time. Stressing romantic themes and dominated by female vocalists, it was the soundtrack of British Caribbean households.

Showcasing some of the best party scenes perhaps ever captured on film, Lovers Rock is right up there with the Hudlin Brothers’ classic 1990 comedy “House Party” and Camus’ Black Orpheus (1959). McQueen likes us to tally with the characters and this works in Lovers Rock where handsome boy (Top Boy’s Michael Ward as Franklyn) meets beautiful girl (Amarah-Jae St. Aubyn as Martha) at a seventies house party. Because his very smooth shot is successful, the audience gets to bump, grind, wine, fight, and flirt right along with Franklyn and Martha. McQueen’s direction squeezes the viewer into the wall to wall packed,modest sized suburban living room. This reggae soaked romantic fantasy is an imperfect, almost plotless adventure but an enchanting symbol of cultural resilience and youthful hope.

The state sanctioned violence circumscribing Black British lives that plays out in the other stories, plays a minor role in “Lovers Rock.” There are hints though, of the conflicts starting to arise from discomfort with encroaching Black culture, and the rising Black population in once all- white neighborhoods, as the first generation of Black immigrants move into adulthood.

Finally, in “Red, White, and Blue,” megastar John Boyega plays Leroy Logan, who stayed committed to leaving his career as a scientist to become a police officer and try to change the system from the inside. The real Leroy Logan recalled in a recent interview with The Guardian, his father was so unrecognizable he walked straight past him at the hospital after his father was brutally beaten by police. Still he remained committed to joining the force. Channeling the same type of righteous intensity as a young Denzel Washington, Boyega’s Logan is a cop stuck between the rock of a racist police force, and the hard place of his community (and father) that see him as a traitor.