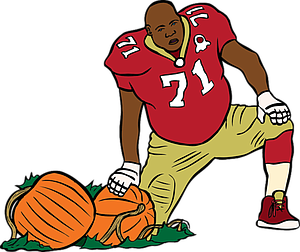 I am an 86-year-old author and retired educator. This does not necessarily make me an expert on football. However, my grandson, Austin Fendley, a recent graduate from the University of Texas and an avid football fan, knows as much about the subject as many coaches and sports commentators. Also, he and I are “two peas in a pod” about racism. We have watched with interest as more and more Blacks have been named starting quarterbacks on the national football scene. Capitalizing on our strengths, we decided to co-author this article.

Since the earliest days of professional and college football, the number of Black play- ers has increased exponentially. However, the ratio of Black players and Black quarter- backs remains disproportional with 67 percent Black players and 17 percent Black quarterbacks. The Canadian Football League was more open to welcoming Black play- ers than the leagues in America were. As an example, Warren Moon was not selected in America until he had won five Grey Cup championships in Canada. Moon became the first Black Houston Oilers’ quarterback in 1984, and his success shattered the stereotype that Blacks could not succeed as a quarterback. He ushered more successful black quar- terbacks into the National Football League (NFL) in the 1980s. When Moon first be- came the Oilers’ quarterback, I remember hearing people say he was not smart enough to function as an NFL-caliber quarterback. I happily watched him prove them wrong.

The number of Black quarterbacks in the American professional leagues has grown, and Michael Vick was drafted in 2001, as the first Black to be taken with the first over- all pick in the NFL draft.

In 2017, longtime quarterback, Eli Manning, was benched and was replaced with Geno Smith who was Black. Since the inception of the game, two Black quarterbacks and one multiracial led their teams to a Super Bowl victory: Doug Williams in 1988; Russell Wilson in 2014; and Patrick Mahomes in 2020.

America has, in fact, made progress in naming Black quarterbacks on the professional fields. Still, many of them have experienced racial issues. For example, Deshaun Wat- son, the Houston Texans’ quarterback stated that he did not want to be called a dual- threat quarterback because the term is traditionally used to stereotype Black quarterbacks. In 2018, racial remarks were made about him after he made a bad deci- sion during a game. A superintendent of a school district outside Houston remarked, “When you need precision decision making you can’t count on a Black quarterback.” Fortunately, that superintendent came under fire and he later resigned.

After reading a story about Deshaun’s upbringing, we were reminded that he gives credit to his mother who was a single parent of four children and living in the proj- ects. His mother held down a fulltime job and after she got off work, she would spend the next few hours volunteering at a homeless shelter. That made her eligible to be the recipient of a Habitat for Humanity home. In 2011, when Deshaun was in high school, his mother was diagnosed with stage-five tongue cancer forcing him to function as a high school quarterback and as a caretaker raising two of his siblings. Given the history of Deshaun and his mother, and the hardships the family faced, the challenges of being a Black quarterback did not seem to be an insurmountable task.

A proven truism over the last two seasons is that we are clearly in the age of Black quarterbacks. The remarkable advancement of blacks to master the game’s most impor- tant position proves those who thought they lacked the leadership skills and intelli- gence are wrong. Clear evidence with 10 Black quarterbacks starting the first week of the 2020 NFL season reiterates that the new normal— Black Quarterbacks Matter.

For 61 years, Dr. Bertie Simmons, Ed.D., author of Whispers of Hope: The Story of My Life, was a dedicated educator in the Houston Independent School District (HISD). Simmons came out of retirement to serve as principal of Furr High School in 1999. During her more than 17 year tenure, she was instrumental in revitalizing the school and creating transformational opportunities for some of Houston’s most disadvantaged students.