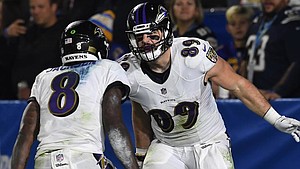 Two years ago, the Baltimore Ravens decided it was time to re-energize their offense. The team traded back into the first round of the 2018 NFL Draft and selected Lamar Jackson, one of the most electrifying prospects at that time. The Ravens added tight end Mark Andrews in the third round of that same draft.

The two showed flashes as rookies, but last season was truly a breakout year for them. Jackson led the league with 36 passing touchdowns and was named NFL MVP. Andrews was on the receiving end of 10 of Jackson’s passing touchdowns, solidifying himself as one of the most dangerous tight ends in the league.

The Jackson-to-Andrews connection hooked up two times for touchdowns in the season opener, but failed to get into the end zone in the next two games against the Houston Texans and Kansas City Chiefs. They got back on track on Sunday, October 4, 2020 in the Ravens’ 31-17 win over the Washington Football Team when Jackson found Andrews for two touchdowns.

“It felt wonderful. Our chemistry, really, never left. It was just a hiccup in the [Kansas City] game, I guess. We’re good— it was great to have the chemistry going today,” Jackson said after the game.

“It’s great. Any time you can find the end zone, and you can throw a couple touchdowns, it feels great,” Andrews added.

The chemistry and trust that a quarterback has in their tight ends is crucial for an offense like the Ravens that relies on throwing the ball between the hashes. So far this season, Andrews has 12 receptions for 166 yards and four touchdowns.

Andrews has become an ultra-reliable option for Jackson because the two work at it all the time. “We’re working hard in practice, and we’re just hitting our stride. We’re just going to keep on getting better. When you have a guy like [No.] 8 [Lamar Jackson], it’s just fun to go around and fly around and play games. It was a good win,” Andrews said.

Ravens head coach John Harbaugh has a front row seat to observe the work that Andrews and Jackson do every day. He can’t put an exact finger on what makes it work so well. All he knows is that it’s productive.

The Ravens hope to keep riding the Jackson to Andrews connection as they march through the season. Right now, the Ravens (3-1) sit behind the Pittsburgh Steelers (3-0) in the AFC North standings. Andrews has never scored a receiving touchdown against the Steelers. Baltimore would like to see that happen when the Ravens host the Steelers later this month.