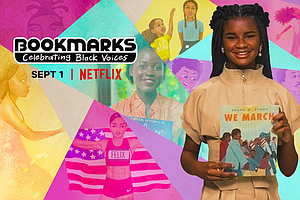 Teen activist, author and now host and executive producer of Netflix series “Bookmarks: Celebrating Black Voices,” Marley Dias admits she was slightly disappointed in one thing she did with regards to her historic #1000BlackGirlBooks project. “I didn’t tell a lot of my friends about #1000BlackBooks,” she says, “because I was afraid they wouldn’t understand or wouldn’t care or would think it wasn’t something a young person should do.”

Those feelings were perhaps understandable as Dias was just eleven years-old when she single-handedly launched that campaign after she complained there weren’t enough Black girls as main characters in books for children her age. The campaign’s original goal was to collect 1,000 books that featured Black girl protagonists and distribute them to her peers. Overwhelmingly successful, it ended up receiving upwards of 9,000 books.

Things are different now that Dias is a seasoned fifteen year-old. “Now, I tell people when I’m doing cool stuff and I take pride in my work.” Since #1000 BlackGirlBooks, Dias has authored her own book, “Marley Dias Gets it Done And So Can You” with a foreword by filmmaker Ava Duvernay, who Dias says is one of the people she most looks up to. “She has done so much to help support the ideas of Black girls, our experiences, and to make sure we’re not forgotten.”

In addition to producing, Dias also hosts “Bookmarks,” a twelve-episode series geared toward pre-schoolers where celebrities such as Lupita Nyong’o, Tiffany Haddish, Misty Copeland, Marsai Martin, Common, Jill Scott, Caleb McGlaughlin, and others reading books by Black authors. The subject matter of the books touch on issues such as , anti- racism, and American history. The series also streams on the Netflix Jr. Youtube channel.

Author Jacqueline Woodson, also one of the “Bookmarks” readers, is the author of Dias’ favorite book, “Brown Girl Dreaming.” “I love that book so much!” Dias exclaimed. “Anyone who’s been following me recently is probably tired of me talking about it! It’s so great though!” As for her favorite book that she has read this year she says is “Looking For Alaska” by John Green. “It’s not a Black girl book, but it is a diverse book. I love John Green books because he can connect with so many people. He is such a good writer.”

Though Dias is pleased with advances made in diversity and representation in literature, there is one area where she believes work still needs to be done. “One place where you can have more representation is fantasy and science fiction. It’s super weird we don’t see Black people existing in the future.” This is the reason, Dias admits, she did not read as many science fiction and fantasy stories when she was younger. “I rarely saw myself in those stories. It would mean a lot to me, to be someone who could be invested in those stories” she says, “to see they’re making a conscious effort to show experiences that mean a lot to me.”

Dias learned a great deal from the experience as an activist, and has this to say to other young people who might want to have an impact as well. “Learn how the issue exists on a systemic level. A lot of the times something frustrates us personally, but learning how it’s part of a larger system is how you can better understand how to take it down from the root and how it affects your broader community and the people you care about.”

One structural issue she encountered in deploying #1000BlackGirlBooks, was how unresponsive curriculum creators were to changes in society. “These curriculums don’t get changed, don’t get edited, don’t focus on how cultures and communities change. Students have limited say in the types of material they learn and how they learn it.”

Dias’ peers fall into two groups in terms of their responses to her remarkable experiences and accomplishments. The aspiring journalist says, “Some kids are super aware and now are interested in activism. They understand that it’s about changing the world and there’s stuff that comes with that.” The other group of peers tend to see only the rewards of her labor as opposed to the labor itself. “Some people only see it as she has a Netflix show or she did a commercial, she met Rihanna and that can be frustrating. “ Dias doesn’t let the resulting negativity impact her, however. “If people want to see the deeper meaning behind my work then they will and their feelings don’t necessarily define my work.”