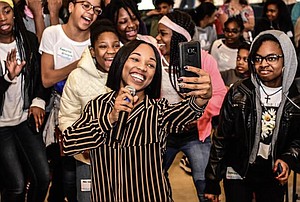 As businesses rethink their strategies and entrepreneurs continue to scramble to maintain successful businesses during a global pandemic Raven Paris, a Baltimore based brand consultant and multi- media strategist who has freelanced and served as a radio host for local and national platforms like 92Q and nationally for Def Jam, DTLR, TMZ & BET, has come to change the entrepreneurship game with her debut book, “The Game Changer: Start-Up Kit to Become or Sustain Entrepreneurship.” 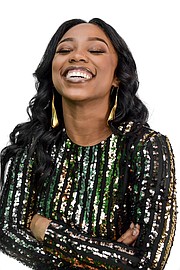 The 51-page guidebook addresses the concerns of new and aspiring entrepreneurs during this time when it may be necessary but difficult pivot because of COVID-19 related revenue changes for businesses. Even though we are living in the digital age and connection might be at our fingertips, support is often not. “The Game Changer” is a guidebook that supports a demographic of specifically Black entrepreneurs and is tailor-made to hold their hands through goal setting, sales and even advertising.

“If we’re able to spend in our community, we’ll keep the dollars in our community,” Paris said when asked why newly established or seasoned black dream chasers should invest in buying “The Game Changer.”

Paris says she is no stranger to dropping off copies of her new guidebook in-person. “I love for people to be able to relate to me, so whether I’m having a good or bad day I hop in my car with my mask for folks that support me, You can’t always touch or reach people that you meet on social media, I like to show love to the people who show love to me,” she said.

Paris naturally guides her peers and clients step-by- step through their initial jump into the entrepreneurship game based on her experiences. “I’m not a graduate of any formal communications program. I went to school for Social Work at Morgan State University so I’m driven to think about people first,” she said.

The plight of entrepreneurs is something the new author understands personally as she remembers vividly quitting her job at a local mobile-phone store in 2017 in order to pursue her dream of expanding her voice in entertainment full-time.

“Entertainment is a male-dominated world and doesn’t come without its challenges. And being an attractive woman, you have to work even harder for men in the industry to take you seriously because they feel like you’re going to sell your soul in order for doors to open for you,” Paris noted.

Throughout her new book, Raven urges early-stage entrepreneurs both men and women not to immediately quit their jobs but to first strategize and prepare spiritually, emotionally and financially for what she describes as a time when things don’t always go as planned.

“It can be uncomfortable to follow your dreams and in that first year especially, it gets lonely as you’re spending an increased amount of time on your new- found passion,” Paris said.

Space for journaling and prompts to help are laced throughout the start-up kit to become or sustain entrepreneurship because while this is a guidebook rich in resources Paris wanted it to be personal.

“I want entrepreneurs to analyze themselves by asking themselves certain questions based on their own industry [to] find their niche and what makes them unique,” she said.

As a self proclaimed seasoned social media mogul Paris has amassed 35.7k followers on her Instagram alone; and is no stranger to the online game that we are all playing as entrepreneurs in 2020. However, it’s not about the followers, according to Paris who reminds entrepreneurs: “Don’t be driven by the followers but be driven by the intention of what your goals are and gaining believers. Is your intention to inspire? Is it to motivate others? You definitely want to reach as many peoples you can but set bigger intentions than just having a lot of followers.”

Paris is well known in some circles for her local or national notoriety and successes with those aforementioned organizations and following on Instagram, but she hasn’t forgotten fellow entrepreneurs, mentors and friends who have supported her along the way so she has included a guide to Black Businesses in the DMV, New York, and even Atlanta throughout “The Game Changer.”

“I just see myself as someone who is trying to change the game and be an example to entrepreneurs that I didn’t have when I came to the game. No one gave me the resources or the tools to be able to thrive as an entrepreneur,” said Raven.

Paris believes her best tool is the ability of her spirit being able to lead her to make certain decisions or not make them. She credits her intimate relationship with God as being what allows her to keep herself away from the distractions and anything else that does not feed her spirit in a positive way. She fasts intermittently and abstains from any lifestyle habits that may take her focus off her new entrepreneurial journey.

“I feel like when you have that relationship with God, it just helps to make things clearer— hard work paired with faith are driving forces in my life,”Paris said. “I’m being used as a vessel by God to be able to allow my community to build their own tables and open their own doors to be able to thrive as entrepreneurs or to just pursue their passion.”