Prospering during the pandemic but is Zoom here to stay? 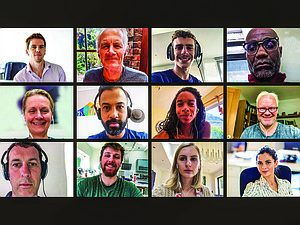 While it’s widely known that Microsoft and Facebook started respectively in the 1980s and 2000s, not a lot of signifi- cance was given to the start of these now multi-billion-dollar companies. It appears Zoom will follow in their footsteps.

The nine-year-old virtual platform became popular when the coronavirus pandemic began as the platform for not only the home for business meetings but social and religious gatherings, education, and events like weddings and funerals.

MSN reported that Zoom has a market cap of $129 billion and is now worth more than IBM and twice as valuable as VMware. In 2019, CEO Eric Yuan had a net worth of about $3 billion. Today, Forbes places Yuan’s “San Francisco, Cleveland, the United Kingdom. We’ve had visitors from everywhere,” one member said.

Dennis Bell, the founder and CEO of Byblos noted that, “even after the pandemic, Zoom will be a part of everyone’s daily life. It’s a convenient way to reach out to people, especially those who are far from you.”

“Regardless of the time zone differences, you can easily communicate effectively. It provides a lot of opportunities to interact virtually with your team. Zoom can also record videos that allow you to store and have access to it whenever needed. It is also a convenient way to replay a part of your meetings for recording purposes. Zoom was here even before the pandemic, and it is likely here to stay and be a part of the business and people’s lives,” Bell said.

Erik Rivera, the CEO of the online telehealth platform, ThriveTalk says he currently attends as many as 20 Zoom meetings per week. Rivera said the video chat platform is facilitating his business. “As we have moved our operations model entirely online, moving forward, I can only predict that this number will stay high,” Rivera said. Mark Hayes, the head of marketing atvalue at approximately $20 billion.

In its most recent earnings report, the company said revenue over the last quarter increased a whopping 355 percent from a year earlier, as many companies struggle to stay afloat with the deadly pandemic still raging. And, if there were any doubt that Zoom is here to stay, business owners and many users in and around Baltimore say they are committed for the long haul.

Alcoholics Anonymous leaders in the city say they’ve taken measures to ensure the security of their zoom meetings because they believe they’ll be using the platform for some time.

The group hosts 800 meetings each week, and many say Zoom has opened Baltimore’s gatherings to a much larger audience. the advice and tutoring company, Kintell, said he’s also attending countless Zoom meetings and believes they’re here to stay. “At this point, it went from a novelty to standard procedure,” Hayes declared. “In my view, the coronavirus taught the world that a lot of roles could be carried out remotely, for better or for worse.”

There are skeptics, however. Although Martin Seeley called Zoom the best alternative to roundtable meetings during COVID-19 and has helped companies adjust to the new normal of communications, he doesn’t believe it’ll remain popular.

“After the pandemic, it will have a great decline in sales because people still prefer traditional face-to-face meetings instead of virtual meetings,” said Seeley, the CEO of MattressNextDay.

“It just happens that companies needed alternative ways to conduct business meetings, and they have discovered Zoom as the best tool for virtual communication.”

David Walter, a local electrician, agreed. “While I do see Zoom as a major part of business and life in the short-term, I don’t see that as lasting,” Walter opined. “It will still be popular because I think a lot of folks didn’t understand all of the benefits, but hopefully, as this virus continues to fade, and if we get an effective vaccine, I think you’ll see somewhat of a return to in-person meetings.”