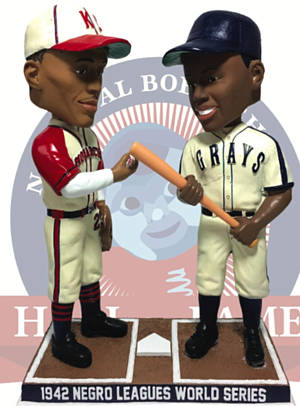 Each bobblehead is individually numbered to 1,942, and they are available through the National Bobblehead Hall of Fame and Museum’s Online Store and NegroLeaguesHistory.com. The bobbleheads, which just arrived and ship now, are $50 each plus a flat-rate shipping charge of $8 per order.

With Paige, who was born in Mobile, Alabama, and Gibson, who was born in Buena Vista, Georgia, being two of the game’s biggest stars and most popular personalities, the 1942 Negro Leagues World Series was a much-anticipated matchup between the American League champion Monarchs (27-12) and the National League champion Grays (47- 19-3). It was the first World Series between eastern and western Negro Leagues champions since 1927.

The Monarchs ended up sweeping the Grays in four games in the best-of-seven series. Paige appeared in all four games on the mound, winning one of his two starts and saving another. The power- hitting Gibson was held in check by Monarchs’ pitchers, finishing the series 1-for-13 with no home runs. In Game 2, Paige got out of a bases-loaded jam in the seventh inning when he struck out Gibson on three pitches. The World Series featured seven future Hall of Famers and was played in four different locations – Griffith Stadium in Washington D.C., Forbes Field in Pittsburgh, Yankee Stadium in New York and Shibe Park in Philadelphia – which allowed more fans to take in the huge draw. The 1942 World Series title was the last for the Monarchs while the Grays, who split their season between Pittsburgh, Pennsylvania and Washington, D.C., captured back-to-back crowns the next two seasons. The games took place nearly five years before Jackie Robinson broke the color barrier on April 15, 1947, when he became the first black player in Major League Baseball. Josh Gibson, who is considered to be one of the best to ever play baseball, never saw Robinson break the color barrier, as he died of a stroke in Pittsburgh on January 20, 1947, when he was just 35 years old. At age 42, Satchel Paige made his major league debut with the Cleveland Indians in 1948, when he became the seventh black player in MLB and the first former Negro Leagues player to pitch in a World Series, which the Indians won that year. In 1971, Paige became the first electee of the Negro League Committee to be inducted into the National Baseball Hall of Fame, while Gibson became the second Negro Leagues player to be inducted in 1972. With the 2020 Major League Baseball World Series approaching, we’re thrilled to be unveiling the first bobblehead commemorating a Negro Leagues World Series,” National Bobblehead Hall of Fame and Museum co-founder and CEO Phil Sklar said. “The 1942 Negro Leagues World Series is one of the most famous matchups in history, primarily because of the star power on both sides. Satchel Paige pitching to Josh Gibson is as good as it gets and now fans are able to capture the historic matchup in bobblehead form along with several other special Negro Leagues bobbleheads.”

The bobbleheads are officially licensed by the Negro Leagues Baseball Museum (NLBM) in Kansas City, Missouri and approved by the families. A portion of the proceeds benefits the NLBM as well as the respective families.

About the Negro Leagues: The first successful Negro League was founded by Rube Foster on February 13, 1920 at the Paseo YMCA in Kansas City. Foster believed an organized league structured like Major League Baseball would lead to eventual integration of the sport and racial reconciliation. Foster did not live to see his dream come true. Others picked up his cause and in 1947 Jackie Robinson broke Major League Baseball’s color line. Prior to 1920, African American players played on independent teams throughout the country, usually barnstorming to cities and towns, large and small.