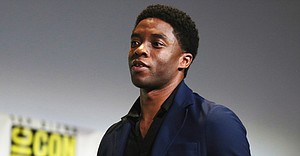 T’Challa/Black Panther in Avengers Infinity War and Avengers: End Game, starred in and produced the films 21 Bridges, Marshall and Message from the King, which he served as Executive Producer. At the time of his death, Boseman was in pre-production as producer on Yasuke, a film about the world’s first Black Samurai in which Boseman was slated to star.

In addition to acting and producing, Boseman was also an activist and philanthropist supporting social justice initiatives like Michelle Obama’s #WhenWeAllVote and celebrating fellow Bison Kamala Harris’ history making selection as the Democratic Vice-Presidential nominee for the 2020 U.S. Presidential election, which was his last Twitter post before his death.

In 2018, the wunderkind performer delivered a powerful commencement speech at Howard University encouraging students to rise above traumatic experiences and applauding their campus activism. Boseman, who was mentored by fellow Howard University alum, Phylicia Rashad and helped financially by Denzel Washington as a student, donated $100,000 to #Change4Change, which supports HBCUs in November 2019.

The youngest of four, Boseman is survived by his parents, Leroy and Carolyn; siblings Kevin, Dionne and Derrick; and wife Taylor Simone Ledward. Boseman was 43.