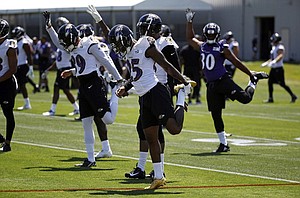 The process of sorting through a group of 90 players and narrowing the list to 53 is always a rigorous undertaking. This season, things are a bit tougher because the preseason games where eliminated. The Baltimore Ravens have a roster full of talent, including 12 pro-bowlers, which ties the 1973 Miami Dolphins for the most selections ever on an initial roster. This is an example of how well the Ravens evaluate talent.

Baltimore will need every bit of their talent for evaluation this year, as they get closer to roster cut down day.

“I think [executive vice president and general manager] Eric DeCosta and his staff are always in constant communication with the coaching staff, and they are always ‘gazing into their crystal ball,’ trying to stay ahead of the curve with things. They do a great job of that. So, I definitely think these are things that are discussed very openly and constantly,” offensive coordinator Greg Roman said. “It’s our job to make the most of everything we can.”

Roman said the scrimmage the team had recently was like the first preseason game. It gave the players a chance to have a more live atmosphere that would be more similar to game day. That’s critical for the front office as they sort through what players they think will help contribute to a winning season.

Defensive coordinator Don “Wink” Martindale was pleased with the play of 2020 third-round pick Malik Harrison during the scrimmage.

“I think in the scrimmage the other night, he [Harrison] really started coming downhill and started showing some of his physicality. That just comes from getting more and more groomed in the system and understanding his responsibilities, and then just playing football. He’s going to be a force to deal with. He’s got length, he’s got power and he can play physical. So, he’s started to show that. I thought he really flashed that on Saturday,” Martindale said. their football careers. Martindale said it’s a unique experience for everyone. “Obviously, it’s different. There are guys who’ve made this team, undrafted free agents who’ve made this team off the fourth preseason game. Right there at the end, it was neck and neck with somebody else,” Martindale said.

There are starting jobs on the line. There are roster spots on the line also. Some players are literally playing for Martindale complimented how head coach John Harbaugh made the scrimmage as close to a game situation as possible. In his opinion, that helped everyone since they did special teams, offense and defense situations. But the evaluation process is going to be taxing due to other unprecedented variables.

“It’s going to be difficult; the cuts always are. I think it’s different this year, because you have a larger practice squad,” Martindale said. “You’ve really got to have guys with this virus that’s here, be ready to play, because you just don’t know what’s going to happen.”

There is a degree of mystery since the Ravens weren’t able to play against another team in an actual game. The players are ready to see someone with a different color uniform on. The monotony can make days drag but Harbaugh feels good about where the team is.

“Without the preseason games and any kind of ‘measuring stick,’ I think the coaches would tell you— and I think the players would tell you the same way— we feel really good about where we’re at. We feel we’re as far along— from a football standpoint— that we could be,” Harbaugh said.