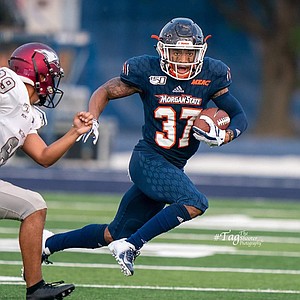 Jordan Alexander Cofield possessed all of the critical attributes of a rising star. He was multitalented, courageous, intellectually and athletically gifted, and was also known for his unforgettable smile. Cofield 20, died in a motorcycle accident on August 22, 2020.

His mother, Dr. Chere M. Goode, recounted sweet memories of her baby boy who was born at Sinai Hospital in Baltimore City, as she choked back tears. Missing her child is still a fresh wound and the realization that she will never see more of her son’s dreams come to fruition is truly devastating.

Jordan was entering his junior year at Morgan State University (MSU) as a double business major who earned a reputation of shining on and off the football field. The football team’s wide receiver was also a track and field team member. He loved dressing in high-end attire, shopping and hanging out with friends and family, and of course football.

“Football was the love of his life,” Goode said. “Well, he was on full-ride scholarship to Morgan, so he saved me a lot of money. I didn’t pay anything for his education, and he actually was on the Dean’s List at Morgan State. If you know anything about two-time athletes, and being on the Dean’s list, that’s like huge. He (Jordan) actually was an NFL (National Football League) prospect. They were looking at him already, although he was only a junior. They actually released a statement about him, saying that although he was small in stature... his speed was amazing. He was a speedster.”a Goode spoke proudly about her charming son who placed number one in 2019 in the men’s 60-yard dash out, of all Historically Black Colleges and Universities (HBCUs). Goode added that whatever her son was determined to do, he was going to do it. The graduate of New Town High School, located in Owings Mills, became a football buff at eight years old. His family was proud of their star athlete who loved to blow kisses to his fans, whenever he made a touchdown. His mother says that she will probably miss capturing those moments on video the most. Jordan inherited the love of football from his parents. His father, Jeffrey Cofield was a part of the trio’s Dallas Cowboy fan club.

Jordan earned his own fan club. One of Goode’s favorite memories was the time when Ernest Jones, a former coach at MSU, came to their home in an effort to draft her son. Goode said that he informed them that he was not leaving without Cofield.

“That just made me so proud, like wow, my son’s dreams are coming into reality. Now he just smiled and said, ‘Mom, what am I going to do?’ I just said, ‘that’s up to you. You’re the one who has to put in the work,’” Goode said. “Jordan is really like the first one, especially from his father’s family and everything, to really go to a university, so everybody was really proud of him that he took his education seriously.” Dr. Cheryl Wood, Goode’s twin sister and Jordan’s aunt is also navigating through the loss of their family’s star.

“Our slogan for him and everything for the funeral was, ‘Everything he touched turned to gold,’” Wood said. “I loved his tenacity. He was a go-getter. I mean just to see somebody set something [in] their mind, and you already know, nothing is going to stop them. That’s who Jordan was.” Wood recounted a comical yet telling story. Her husband, James Wood, once remarked to a very young Jordan that he didn’t know his numbers beyond a certain point. He shocked his uncle, when he informed him that he did know them. The child rattled off his numbers way beyond the point at which he was challenged.

“To me, it’s a reminder of how smart he was academically,” Wood said. “And you know he was going to go far, because he was always like— ‘I’ll show you, not tell you.’”

Layers of loss accompany great disappointment. Jordan’s loved ones will never see him get married, have children or earn an expected NFL contract. However, Wood identified ways the community can support Jordan’s family. Praying for their strength is one; keeping Jordan’s memory alive is another.

“Don’t stop talking about him and his legacy in 20 short years,” Wood said. “I would just say if you want [something], go get it. Just don’t let anything stop you. And that’s what I would say was his mindset and his attitude.”

To support his mother and enable her some time off work during this time of bereavement, donations can be made via Cash App to $cheremgoode or Pay Pal via cherecofield@hotmail.com.