Ravens Lamar Jackson shows he can win from the pocket 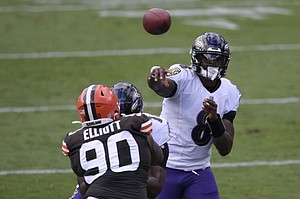 Lamar Jackson’s passing ability was criticized before the 2017 NFL Draft despite throwing for 9,043 yards, 69 touchdowns and finishing with a 142.9 quarterback rating at Louisville. Jackson won the Heisman trophy in 2016.

As a rookie, Jackson’s explosive running, style was showcased by the Baltimore Ravens during their improbable run to an AFC North title. Critics challenged Jackson’s passing ability once again after his rookie season.

Jackson answered by throwing for an NFL best 31 touchdown passes last season while leading the Ravens to a franchise high 14-2 record. In only his second season, Jackson was named the NFL Most Valuable Player, becoming the second player to receive a unanimous selection for the award.

No quarterback besides Jackson has ever finished with 3,000 or more passing yards while rushing for over 1,000 yards. Jackson was virtually unstoppable.

His video game like highlights and countless big plays were still not good enough. To critics, the next requirement for Jackson was to win from the pocket.

Jackson completed 20 of his 25 pass attempts for 275 yards and three touchdowns in Baltimore’s 38-6 win over the Cleveland Browns to start the season. His three touchdown passes in the game was the ninth time he has done so since the start of the 2019 season. That’s more than Drew Brees (7), Patrick Mahomes (6), and Dak Prescott (6). If Jackson’s performance in the season opener is any indication, critics will need to find a new obstacle for him. “I thought he just showed great poise in the pocket the whole game. He had a good awareness of the rush. They were bringing it. They have really good pass rushers. They mixed up their coverage man, zone, different types of zone coverage and he had just a great feel for it,” Ravens head coach John Harbaugh said on Monday, September 14, 2020. “All those things were just really indicative of a well-played quarterback game. Lamar played an excellent game, and the passing game the drop-back passing game was really the main part of that. I thought he just did a great job.” Jackson worked hard during the offseason to improve as a passer. The effort carried over to training camp “I do. [It’s] just dedication” Jackson said when asked if he feels he has improved. “Coach ‘Urb [Quarterbacks coach James Urban] is doing a great job— the QB drills, being consistent, even though sometimes, we might just repeat it, just to keep that dialed in, in our heads and keep my body dialed in.”

Jackson’s favorite target Mark Andrews caught two of his touchdown passes on Sunday. The Ravens wisely paired Jackson with Andrews when they selected him in the third round after trading back into the first round to take Jackson. Jackson always tells Andrews his job is easier because of the top-level pass catching tight end.

“The guys is incredible; he was incredible last year. To me, he’s, obviously, the best player in the world, and his arm reflects that. It reflected that last year; it’s this year as well. He’s going to continue to grow, and he has. It’s just a blessing to be able to play with him. He says I make his job easy, but it’s the other way around for sure,” Andrews said.

Andrews isn’t the only teammate who noticed an improvement in Jackson’s game. Jackson connected with Marquise Brown five times for 101 yards on Sunday. Brown also shared a positive review of Jackson’s upgraded game.

After losing at home in the last two divisional round playoff games, Jackson’s goal is to lead Baltimore to their third Super Bowl title. His improved play could be a reason they make it over the hump.