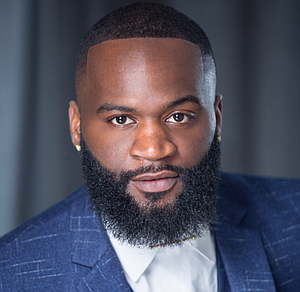 Actor and producer Tray Williams proves the importance of quickly bouncing back from disappointment. Feeling let down after a highly anticipated meeting that the actor director describes as “a scam,” he agreed to read a script offered him by another similarly disappointed attendee, who was a filmmaker. The response was overwhelmingly positive, and a lightbulb went on in Williams’ head. In short order, Williams relocated to Los Angeles to seriously pursue acting. Since then, the Houston native has acted in fifteen films and numerous commercials and is also fully immersed in the role of producer. Williams pro- duced popular Youtube reality competition, “Trapped With The Prince Family” and is president of TV/film distribution for Media Room 360, which provides content for Amazon Fire TV, Roku, Apple TV, VOD, and all android devices. “My job is to bring in content for our platform. So we help people get distribution,” he explains.

Williams, who’s also a father of two, is very clear about his worth and value. “I went through some tough situations early in life so now nothing is going to be any harder than that. I also do a lot of research and so I’m confident because I feel prepared.”

Some years ago, Williams became acquainted with Tamra Simmons, producer of the docuseries “Surviving R. Kelly.” It turned out that one of the scripts Williams presented to Simmons coincided with a project that she was developing about sex trafficking. “She was like, ‘We should just work on this together,’” he recalls.

Simmons and Williams are currently in the process of shopping the series, of which he says, “We wanted to highlight Though Black women and girls make up just five percent of the American population, they constitute forty to sixty percent of the victims of sex trafficking. In his research, Williams found that girls are much more likely to be coerced into a life of prostitution than to be physically made to do so. “A lot of them are manipulated by the men initially convincing them they really love them,” he explains mournfully.

Williams says he has thought about what he would say to anyone thinking of trafficking or using trafficked girls and women for sex. “I would ask them to think about whether or not it’s really worth it to ruin a woman’s life. You would kill someone if that was your daughter or your mother.” Recognizing that the desperate situations these young girls and women are in can cause them to ignore their instincts and ignore red flags, he says he would caution them “No matter how bad your situation is, do your research before going all in with anyone. Don’t make a bad situation worse. Don’t be so trusting. Understand that everybody is not your friend.” stories of survival, and go in depth about the impact of sex trafficking on the victims and their families.”

Compelled to write a script after watching a shocking news report, the project has been a harrowing experience for Williams in certain ways. “They were showing that young girls were just being captured and put into cars. I just felt like I had to do something about it. It was terrible, and I felt so bad.”

What Williams learned from doing the research was much different from what he assumed prior. “Most of them have been sexually abused by a mother’s boyfriend.” Compounding that tragedy, he says, is that girls are often not believed when they report the abuse. Many run away, ending up prey to thousands of sex traffickers involved in a one hundred billion dollar industry.