Sammy Watkins is next to help Ravens WR group 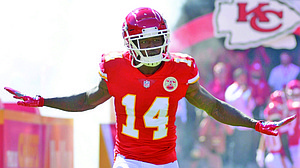 It has been four seasons since a Baltimore Ravens wide receiver finished with 1,000 or more receiving yards. Mike Wallace was the last receiver to do so when he posted 1,017 yards in 2016. Wallace was one of various veteran wideouts the Ravens have turned to over the years to help their passing game.

Ravens general manager Eric DeCosta is hoping that Sammy Watkins can be the next veteran to bolster their group of receivers. Watkins signed a one-year, $5 million contract with the Ravens, last week.

Watkins finished with 37 receptions for 421 yards and two touchdowns for the Kansas City Chiefs last season. Those numbers are hardly impressive but there is still plenty of talent left in Watkins who was selected by the Buffalo Bills with the fourth overall pick in the 2014 NFL Draft.

At 27 years old, Watkins’ body isn’t getting any younger. A full season of service was unlikely and the odds get even worse now that the NFL has expanded to 17 games. SportsInjuryPredictor.com lists Watkins’ chances of injury at 96 percent.

When healthy, Watkins is a crafty route runner that can gain yards after the catch. He can be a down the field threat as well. The Ravens are desperately in need of a consistent pass catcher that can lead the wide receiver group. Having played seven seasons in the

NFL, can Watkins be that guy?

Past veteran additions such as Derrick Mason, Anquan Boldin and Steve Smith Sr. helped add flavor to the passing game. Most of the Ravens receiving records are tied to Boldin, Smith and Mason so obviously the formula can be a successful one.

On the other hand, there were times when the veteran addition didn’t work. Ironically, the last time that happened was when the Ravens signed another oft injured, former Chiefs wideout, Jeremy Maclin. He only played one season for the Ravens before being released by the team one year into a two-year, $11 million deal.

Unlike in 2017 when the Ravens signed Maclin, this year’s team is a dynamic offense. Their rushing attack has led the NFL in back-to-back seasons. The Ravens just have to balance it out with some kind of threat in the passing game.

Baltimore made a few changes on the coaching staff to help do so. Long-time college WR coach Tee Martin was added to the staff to hold the same role. Former personal WR coach Keith Williams was named the passing game coordinator.

They’ll set their sights on a group that now features Watkins as the leader to bring life to the Ravens anemic passing game whose 2,919 yard total was the worst in the NFL last season.

A quick glance at Watkins’ social media indicates that he is up for the challenge.

“I want to thank the Ravens organization and coaches for the opportunity. I cannot wait to get started with the guys, this year will be one to remember for a long time...Let’s go Ravens,” Watkins said via Twitter.