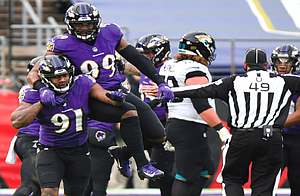 The Baltimore Ravens have established a reputation of strength as a defensive team. Entering last season, GM Eric DeCosta signed free agents Calais Campbell and Derek Wolfe in addition to selecting Patrick Queen in the first round of the draft. DeCosta orchestrated a trade with the Minnesota Vikings to bring Yannick Ngakoue to the Ravens in October. Ngakoue is part of a group of pending defensive free agents the Ravens have to make decisions on this offseason.

According to OverTheCap.com, the Ravens are starting this offseason with $14.221 million in available cap space. “The salary cap sometimes dictates the players that you can have on the team, but we do see some opportunities to bring some guys back. There are certainly some guys we want to target out of the gates. We do feel that we have some younger players that have a lot of potential to help us,” Ravens GM Eric DeCosta said.

In addition to Ngakoue, Baltimore has fellow pass rushers Matt Judon, Tyus Bowser and Pernell McPhee set to become free agents. The Jacksonville Jaguars applied the franchise tag to Ngakoue last March. Ngakoue was traded to the Vikings after he agreed to reduce his one year contract from $17.788 million to $12 million only to be traded weeks later. Ngakoue finished last season with eight sacks while playing for the Vikings and Ravens.

Ravens coach John Harbaugh acknowledged that Baltimore had a crowded situation at outside linebacker which limited opportunities for Ngakoue. But he gave indications that those opportunities would increase if he came back to Baltimore in 2021.

“Yes, I love the guy, and he wants to contribute. We had a unique situation here with all the outside ‘backers we had,” Harbaugh said or Ngakoue.

“So, going forward, if he [Yannick Ngakoue] chooses, and we work it out and he’s here, it’ll be a little different, because he’ll be here from the beginning, and he’ll be starting, and he’ll get a lot more snaps than he got this year. This year was kind of more of a role, probably, at the end of the year. It was only the second half of the season, so I don’t think you can really judge it based on what you saw, in terms of that. It was a little more of passing downs, really.

“So, he’s a great guy, he’s a very talented guy, he plays hard as heck. He bought in 100% to what we’re doing, as far as the different techniques we use, like setting the edge and things like that, and I love him. He’s a great pass rusher, too, and [a] high-motor guy. So, I have nothing but love and respect for ‘Yan’ and the type of player and person that he is.”

At 25 years old, Ngakoue will be an attractive option for teams looking to improve their pass rush. The Ravens will have competition to re-sign the University of Maryland product. Ngakoue will be looking to secure a long-term deal for the first time in his NFL career. Baltimore may not have the funds to grant his wish. Judon, a 2016 fifth-round pick, has evolved into a team leader for the Ravens. The fifth-year veteran was voted to the Pro Bowl the last two seasons.

The Ravens placed the franchise tag on Judon last season which equated to a one-year, $16.808 million deal. He is reportedly looking to sign a contract that will pay him $20 million per season. That number will likely be a little much for the Ravens and most other teams. But it’s clear Baltimore would like to get Judon back at the right number.

“I want Matt Judon back, yes. Whether that will be possible … Again, it’s such an unpredictable year with the salary cap,” Harbaugh said. “So, we’ll have to see about that. But Matt had a great year. [He’s an] all-around player, plays super hard, very good leader, awesome competitor. He does everything well. He rushes, he plays the run, he drops, he plays special teams. He’s an all-around, excellent, excellent football player. So, nothing but applause for Matt Judon and what he’s done.” Bowser won’t fetch a deal as large as Ngakoue or Judon but he’s a player the Ravens would surely like to keep. The 2017 2nd round pick had two sacks and three interceptions last season.

There should be a lot of action on the free agent pass rusher front in the coming months.