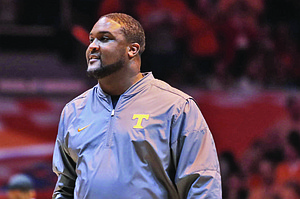 The change should be a positive for the Ravens with Martin bringing a fresh approach to the receiver position. Martin led the University of Tennessee to their only National title in 1998 and was drafted by the Pittsburgh Steelers in 2000. He spent four seasons in the NFL as a backup quarterback with the Steelers and Oakland Raiders in addition to two seasons playing in the CFL.

“Tee is a natural, charismatic leader, whose bright offensive mind will benefit our young group of wideouts,” Ravens coach John Harbaugh said. “His history of coaching standout receivers on the collegiate level will translate well to the NFL.”

Martin was the University of Tennessee wide receivers coach and pass game coordinator over the last two seasons. While at Tennessee, he coached Josh Palmer, a wide receiver that stood out at the Senior Bowl and a likely NFL draft pick in April.

The new Ravens receivers’ coach began his coaching career in 2006 as the passing game coordinator for Morehouse College in Georgia. Martin went on to become the quarterbacks’ coach for New Mexico in 2009 then, served as the wide receivers coach at Kentucky the next year where he coached Texans wide receiver Randall Cobb.

Smith-Schuster is a pending free agent and could be a target to bolster the Ravens’ group of wideouts that is desperately in need of a consistent playmaker. There’s a possibility that Smith-Schuster and Martin could be reunited in Baltimore.

Martin’s son, Amari Rodgers was a standout player last season at Clemson and is considered one of the top prospects in this year’s NFL draft class. Rodgers would give the Ravens a weapon in the slot to replace Willie Snead who will likely be moving on in free agency.

Adding Martin to the fold will undoubtedly be a plus for Baltimore’s passing game, which is desperately in need of a jolt. It will be Martin’s first coaching job in the NFL, and after spending over a decade in the college ranks, Martin is more than ready to take on the challenge.