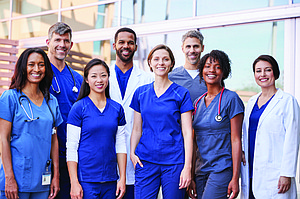 The initial investment will be made to launch “Diversity in Cancer Research” internships, which will offer biomedical cancer research internships for undergraduate students from racial and ethnic backgrounds that are under- represented in the scientific community.

“The American Cancer Society’s goal is to decrease the U.S. cancer death rate by an additional 40 percent by 2035,” said American Cancer Society Chief Executive Officer Gary Reedy. “To accomplish this ambitious plan, we must tackle the racial health disparities that exist in cancer. This includes addressing the critical need for diversity and inclusion in the scientific workforce by increasing the proportion of researchers and clinicians of color. We are so grateful to Elizabeth and Phill Gross for their generous funding of this game- changing initiative.”

According to data from the National Institute of Health, the number of grant, applications from Black and Latino scientists are very low, just two percent and four percent, respectively. This inevitably translates to fewer people of color entering career stages in cancer research. The “Diversity in Cancer Research” program will build on the American Cancer Society’s existing research career development grant programs by promoting the training of undergraduate students under- represented in biomedical cancer research and encouraging the pursuit of careers that will increase diversity in cancer research. A more diverse scientific workforce is critical to invigorating problem solving, driving innovation, and ultimately better equipping the scientific community to address inequities that exist in cancer prevention, treatment, and care.

“In the fight against cancer, advancements in research provide the best hope for saving millions more lives,” said Elizabeth Gross. “Phill and I believe that creating opportunities for a more diverse community of cancer researchers will not only spur innovation and ingenuity, but it will help eradicate health disparities, build trust across these various communities and advance cancer care for everyone. It is our joy to assist in this important work alongside the American Cancer Society.”

To begin, 40 internships per year for 10 years will be granted under the “American Cancer Society/Gross Family Diversity in Research Internship” name. In addition, an advisory committee has been formed to focus on the implementation of the internship program and lead the development of new programs under the umbrella. New programs will include additional targeted initiatives for under represented students, faculty and clinicians— all aimed at increasing the diversity of the workforce in cancer research and patient care.

Anticipated concepts that could qualify for funding under the “Diversity in Cancer Research” program umbrella include specialized institutional research grants for HBCU’s and other minority- serving institutions; physician scientist clinician grants made available to people whose racial or ethnic backgrounds are underrepresented in the scientific community; and career development assistance after completion of Diversity in Research internships.