Ever wondered how and why gun violence breaks records during a pandemic? 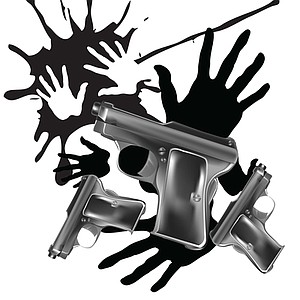 Despite being housebound for half of 2020 due to Governor Hogan’s stay-at- home mandate in response to the COVID-19 state of emergency, Baltimore still finished last year with a near record number of murders— 335. The governor’s March-to-October shelter in place order encompassed the entire summer, when violence on the streets historically tends to spike, and yet the result was still grossly morbid.

Speaking of history, 2020’s total homicides were only 3.9 percent less than 2019’s 348 killings, which was the highest number in more than 20 years, at a time when Baltimore streets were noticeably less occupied 24-hours a day for more than 26 weeks. Last year had the third highest number of murders since the start of the new millennium.

Bars and entertainment venues were shuttered, alcohol and medicinal marijuana, and any type of food, could be ordered and home-delivered, and curfews were imposed, limiting activities and mobility of citizens, and restricting certain businesses from operating and others with revised hours of operation.

So, what motivated this continuing street warfare during a deadly, ubiquitous public health crisis? There are three prominent factors: desperation, drugs, and guns, and a host of ancillary social conditions that piqued, affecting the most vulnerable and deprived among us, conditions that Coronavirus bolstered.

These are not excuses. Many of these same conditions, compounded by domestic violence, sexual abuse, gang activity, and bullying, inordinately affect our youngest citizens in severely destitute communities— where more than one-in-three children live below the Federal poverty line— with a condition described as Adverse Childhood Experiences (ACEs), a syndrome akin to Post-Traumatic Stress Disorder (PTSD), a major state of depression affecting returning military veterans resulting from the horrors of war. According to the Baltimore City Health Department nearly one-in-three Baltimore children suffers from ACEs.

Add, COVID-19 with all its associated negative consequences to these people’s existing malaise, plus easily accessible firearms, and the murder rate just went up. People of a certain age will recall a song by Grandmaster Flash & The Furious Five, titled “Don’t Push Me ‘Cause I’m Close to The Edge.” Many of these dejected Baltimoreans are already over the edge, and barely clinging.

One glaring indication is record- breaking suicidal warnings in Baltimore City. The mental health crisis hotline, Here2Help, reported their intakes jumped in a 90-day period in mid-2020 from 2,800 to 5,700. Within six months of the pandemic hitting our region, callers threatening suicide spiked from 75 to 380.

When the dangerously pathological scourge of opioids is factored into the equation, the propensity for increased gun violence during a pandemic just got exponentially worse. Historically, Baltimore has a quantifiable reputation for having one of the worst heroin epidemics in the United States, a habit that must be fed daily and will not take a respite for COVID-19. Opioid addiction is a major driver of violent crime in our city, supporting the habits of approximately 20,000 addicts, according to the health department.

Then there are the guns. Precise statistics on the number of illegal guns on Baltimore streets were not available by deadline, but consider these facts that paint a picture making it clear how the circumstances existing in this city’s most underserved communities, where thousands of guns are present, resulted in one murder every 26 hours and 13 minutes on average for all of 2020.

Nationally, it was estimated in 2017 that Americans were in possession of 393,347,000 firearms. The total population of the U.S. in 2017 was 325,100,00, six guns for every six people— man, woman, and child— in the entire country. This count does not include police and licensed security personnel’s weapons. The Baltimore City Police Department reported they have removed more than 100,000 guns from the streets in the last 30 years. In the first eight months of 2020 Baltimore police arrested 800 suspects on weapons charges and confiscated over 1300 guns.

At its core, abject poverty, illiteracy, subsistence resources, intoxicants and hopelessness, are the drivers of homicidal violence in urban America, including Baltimore City, where generations, in a linear trajectory directly from slavery to present have been left to fend for themselves in squalor conditions.

Just like conventional wisdom affirms that the economy will not recover until Coronavirus is eradicated, gun violence will not be eradicated until people who have been written off as society’s permanent underclass are provided the tools, the encouragement, and the moral support to lift themselves.

Regi Taylor is a West Baltimore native. The married father of four is an artist, writer and media professional specializing in political history. Check out Regi’s meme gallery at https://www.humortimes.com/cartoons/d c-crap/