What to make of Ravens and Orlando Brown Jr 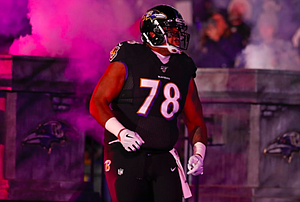 It’s always interesting how a particular event can create new situations that weren’t previous thought of. That’s exactly what happened with the Baltimore Ravens last season.

Ravens left tackle Ronnie Stanley signed a five-year $98.7 million contract to protect quarterback Lamar Jackson’s blindside. Stanley was considered as one of the top left tackles in the NFL. Firmly entrenched on the other side of Stanley was right tackle Orlando Brown Jr. who was entering his third season.The Ravens selected Brown in the third round of the 2018 NFL draft and switched him to right tackle since Stanley was already in place at left tackle. Baltimore felt it had an outstanding pair of young bookend tackles to solidify their offensive like for years to come.

Then disaster struck when Stanley suffered a fractured and dislocated ankle against the Pittsburgh Steelers in November that landed him on the injured reserve list. Brown was moved to left tackle and settled in to help steady the Ravens offensive line.

“Orlando had a great year this year. Losing Ronnie Stanley was definitely a tough deal for the offensive line to handle. I think Orlando did a great job and I think the offensive line in general really battled versus some adversity this year,” Ravens General Manager Eric DeCosta said in January. Last year was Brown’s first experience as a left tackle since his time as a standout offensive lineman at Oklahoma.

“I’m still far from playing my best ball. And next year I’m going to get there or closer. I’m very motivated to be the best me that I can be, as an individual to help put us in the best position going forward,” Brown said after Baltimore loss to the Buffalo Bills in in Divisional round of the playoffs.

Now, Brown wants to stay on the left side, a position that has typically warranted a higher salary than right tackle. It’s no coincidence that Brown wants to make this permanent switch while entering his fourth season, which is his contract year.

Stanley is on track to return at some point this year so there isn’t a long-term option for Brown to play left tackle. This creates a bit of a pickle for DeCosta who at one point was looking to sign Brown to an extension to man right tackle for the coming years.

Now that area of strength could be weakened because Brown won’t play right tackle. DeCosta can stand pat and have Brown play left tackle until Stanley is back but that’s only a short fix. And it could set up the potential from Brown to hold out knowing his time at left tackle is only temporary.

The more likely scenario would be a trade with a team looking for a young offensive lineman to be their left tackle. The Jacksonville Jaguars, San Francisco 49ers, Los Angeles Chargers and Washington Football Team all make sense as trade partners for the Ravens.

Trading Brown would save the Ravens $2.4 million in cap space. That’s not a lot, but every little bit counts for a team like the Ravens, which is facing a cap issue and has multiple free agents to re-sign.

For three years, Brown followed in the footsteps of his father Orlando “Zeus” Brown who played right tackle for the Ravens from 1996 to 1998 and 2003 to 2005. Now he is looking to fulfill his lifelong dream to play left tackle in the NFL.

Will the Ravens grant him his wish?