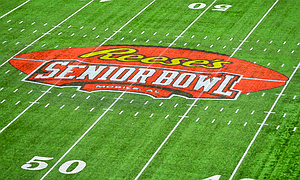 It’s that time of the year again. The third week of January is when the NFL shifts its focus to Mobile, Alabama the home of the Reese’s Senior Bowl. The event hosts the best collection of senior collegiate players in the country. This year, it will be the best opportunity to get an up close and personal look at prospects entering the 2021 NFL Draft.

The Baltimore Ravens have been especially focused on players at the Senior Bowl. General Manager Eric DeCosta and Executive Vice President Ozzie Newsome have made coming to the Senior Bowl and annual event. It’s where they get an intricate look at prospects.

The Ravens picked a total of seven Senior Bowl participants in the 2018 and 2019 drafts. This year will likely provide more of the same focus on players in Mobile.

Baltimore may need to add pass rushers since Matt Judon, Tyrus Bowser and Yannick Ngakoue all have the possibility of moving on. The Senior Bowl will give the Ravens a chance to see some solid prospects.

The Ravens should also pay close attention to some of the wide receivers. Lamar Jackson can be an even more impactful player with some added weapons. Florida’s Kadarius Toney and Trevon Grimes are two receiver prospects that could help.

Grimes (6-4, 218 pounds) is a big body wideout who could be used along the outside. Toney is an all-purpose player that can lineup everywhere.

Making it to the AFC Divisional round despite of all the challenges and adversity the faced was monumental.

“It was a unique season in many different ways. Many different things would pop-up day-to-day,” DeCosta said. “You’d think you had something figured out, and something else would come up. But again, not the end result that we wanted, but we see progress with this team. A lot of young players emerged. Very proud of the way that we competed especially the second half of the season with our backs to the wall to get into the playoffs. All the different things we had to handle to win those games. We won a playoff game in the end.”

However, some Ravens’ fans who aren’t happy. There are some glaring holes to fill. It’s pretty clear that DeCosta and Newsome will be up for the task. It starts with a trip to watch the Senior Bowl and see each of the players first hand.