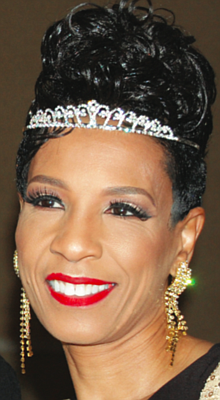 There is not much Ursula V. Battle hasn’t accomplished in her career.

The playwright and Baltimore native has repeatedly guided her Battle Stage Plays to new heights while inspiring, educating, and encouraging her audiences with riveting drama, powerful song, and even belly-hurting laughter.

A one-time “Playwright of the Year” recipient, Battle has added another honor to her long list of awards. In recognition of National Women’s History Month, the Patapsco River (MD) Chapter of The Links, Inc. honored Battle and others during its 18th Annual Women in the Arts Talent Showcase.

The organization honored Battle with this year’s national theme: “Valiant Women of Freedom: Refusing to Be Silent.” According to the Links, the theme honors the brave women who fought to win suffrage rights for women and the “she-ros” who continue to fight for others’ civil and human rights. “What an incredible event!” Battle exclaimed. “It was humbling to be honored among so many talented women who are all exceptional in their own right. Kudos to the Patapsco River (MD) Chapter of The Links for all of their hard work in bringing this outstanding event to fruition. ”Battled continued: “I can still recall the disappointment we all collectively felt after the event was postponed last March due to COVID-19.

“But in the true spirit of this event, which honors those who refuse to be silent, this group of incredible women pressed on, refusing to let even COVID stop them. I am forever grateful for this prestigious honor and the Chapter’s efforts in showcasing the talents of African-American women in the Arts.”

She earned her master’s degree from the University of Baltimore (UB), where she majored in Publications Design. Battle, who writes for the Baltimore Times, also is the recipient of numerous journalistic, creative writing, and other awards, including the Maryland, DC Press Association and Society of Professional Journalist Award, the NAACP’s Thurgood Marshall Community Leadership Award; The Baltimore Marketing Association’s Scholarship Award; and the National Association for Equal Opportunity in Higher Education (NAFEO) Alumni Award.

She earned induction into the Broadcasting Institute of Maryland’s Hall of Fame and has authored winning essays chosen by Fox 45/WNUV and The Maryland Daily Record.

“The Links, Incorporated focuses our service in five areas, one of which is the Arts,” said attorney Kimberly Y. Robinson, president of the Patapsco River (MD) Chapter of The Links, Incorporated “Through Women in the Arts, the Patapsco River (MD) Chapter celebrates the talent of African- American women artists. The event honors these incredible creative spirits while bringing their performances to the Baltimore County community,” Robinson added.

Exposing the community and youth to various artistic formats is important because, throughout history, the African American community has contributed to American culture through art, Robinson noted further.

“Women in the Arts celebrates this ongoing legacy of uplifting and bettering our community through artistic expression,” she said. “Each year, Women in the Arts falls near the intersection of Black History Month and Women’s History Month. Like the themes of these two months, the women we honor live inter-sectional lives. As an organization of African American women, we are proud to take the opportunity to highlight and elevate the voices of women of color as a hallmark of this event.”