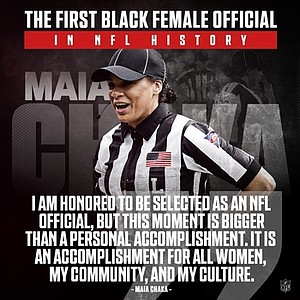 Maia Chaka knows well that Women’s History Month is all about commemorating, observing and celebrating the vital role of the fairer sex in American folklore. She just didn’t know she would become a part of that history.

After years of officiating games in the Pac-12, Conference USA, and the NFL’s Officiating Development Program, Chaka will head to the NFL in the fall.

When she takes the field in September, the Norfolk State University graduate and health and physical education teacher will do so as the first Black woman to work as a referee in the NFL. She’ll also be just the second woman to wear the zebra stripes. Sarah Thomas, who worked last month’s Super Bowl, is the other.

“This is a funny thing. I was actually at home, and I was playing NBA2K with my nephew online because that’s what I like to do at night,” Chaka told NNPA Newswire just hours after an appearance on NBC’s “Today” show. “Then, I received a phone call at around 9:15 p.m. [March 4], and I just dropped everything I was doing. The next thing I know, I’m getting told ‘welcome to the National Football League.’” Did she think it was for real?

“I just jumped up and threw everything off my lap. I thought I was being punked because I didn’t believe it at the time. But it was true,” she remarked.

“Maia’s years of hard work, dedication, and perseverance— including as par to the NFL Officiating Development Program— have earned her a position as an NFL official,” Vincent said. “As we celebrate Women’s History Month, Maia is a trailblazer as the first Black female official and inspires us toward normalizing women on the football field.”

Chaka told NNPA Newswire that she expects coaches and players to treat her the same as any other official.

“I think the coaches just want a good official who is going to get the play right,” Chaka said. “And I think they just want consistency. I hope they do not hold us to a different standard [than men] because we are all officials at the end of the day. It does not matter what gender we are. We are all wearing the same uniform.”

The importance of her historic promotion isn’t lost on Chaka. “It’s an honor to join the National Football League,” commented Chaka, who works with at-risk girls in Virginia. “I just want young girls of color— young women— to know that if you have a drive for something, don’t let anything hold you back just because you think something may give you some limitations. Work hard and follow your dreams.”

Her promotion to the big league also demonstrates to women of color that they can work and succeed in a male-dominated field, according to Chaka.

“As long as you put in the work and you are fundamentally sound in anything that you do, you know you will reach your goal,” Chaka said. “I think it’s important that they see the representation in these fields.”

Asked if she would switch from playing NBA2K with her nephew and challenge him to Madden Football, Chaka demurred. “No, he couldn’t handle me on Madden,” she retorted.