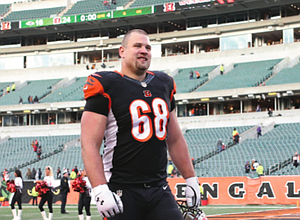 The Baltimore Ravens have been desperately in need of an interior offensive lineman since guard Marshall Yanda retired after the 2019 season. Ravens general manager Eric DeCosta believes they may have found the perfect guy for the job.

Baltimore signed guard Kevin Zeitler to a three-year, $22.5 million contract soon after the veteran was released by the Cincinnati Bengals. Past experience in the AFC North with the Bengals and Cleveland Browns has made Zeitler very familiar with what the Ravens seek to do on the field.

The Ravens ranked first in the NFL in rushing yards per game each of the last two seasons. Their emphasis on running the ball fits a bulldozing blocker like Zeitler very well.

“Every O-lineman you ask, ‘Hey, what do you want to do?’ They all want to be run-blocking, because that usually means you have the lead, or you’re controlling the game, or dominating up front. The Ravens have established that that’s what they’re going to do, and I have a hard time believing they’re going to change that up now,” Zeitler said on his introductory press conference. “After talking to Coach [John Harbaugh] and everything, I thought it fit what I do well with my run blocking and everything. I just thought for me and my family right now, Baltimore was the place to be.”

The Ravens had to shuffle players around the offensive line last year due to injuries. Losing left tackle Ronnie Stanley was a tough pill to swallow. They flipped Orlando Brown from right tackle to left tackle to fill his place. Then guard Ben Bredeson suffered a knee injury in January, which puts his presence on the field in jeopardy for training camp.

All of the injuries make the Zeitler signing a good one because of the 31-year-old’s durability over his career. The nine-year veteran has only missed five games over his career.

Yanda was a fairly durable player as well. He played in 13 or more games in all but two seasons of his 13-year NFL career. Zeirler is no stranger to the greatness that Yanda possessed. In fact, he respects the overall history of the Ravens offensive line.

“The Ravens have a nice offensive line history,” Zeitler said. “You think of Yanda, some of the tackles and the current tackles. It’s not so much about being Marshal, it’s about being the best version of me I can be.” Last season was a major test for the Ravens after Yanda’s abrupt retirement. The team struggled to find a replacement guard and had to use a collection of players to make up for his loss. Baltimore’s rushing attack still finished with similar results. They backed up the 2019 season average of 206 rushing yards per game with a 191.9 yards per game average in 2020.

That total was in large part was thanks to dynamic quarterback Lamar Jackson who finished with over 1,000 rushing yards for his second consecutive season. Zeitler was tasked with the unenviable job of stopping Jackson last season with the Bengals. He got a first-hand look at how explosive Jackson could be in the four times the Ravens faced off against Cincinnati in the last couple of years.

Now that Zeitler is a member of the Ravens, he is glad to have Jackson as a teammate.

“After going against him many times and losing many times, I’m very excited for him to be on my side this time. The things he can do at any given time, I mean ... I really don’t know if there’s a player in the NFL that can do it like him. There definitely isn’t, and that’s exciting. It’s a really cool opportunity to work with that,” Zeitler said.